Dog-walking can be hazardous for seniors, study suggests 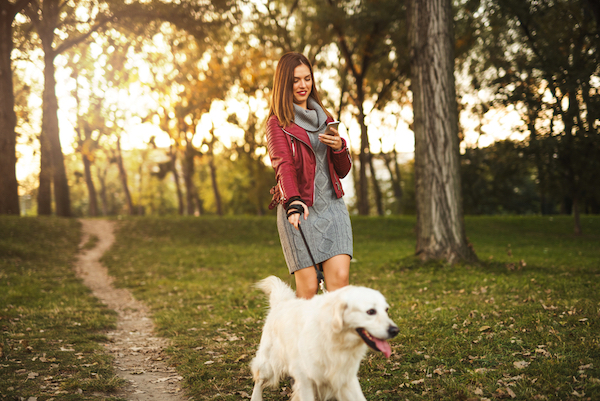 A man walks his dog in Lawrence, Mass., after an overnight snowstorm in early March. (Elise Amendola/AP)

Dogs need to go on walks, and walking is good exercise for older adults. Seniors who combine the two — by walking a dog — are healthier than people who don’t, according to some research.

But a new study by University of Pennsylvania researchers offers a cautionary note. Strolling with a leashed dog, it says, “imparts a significant and rising injury risk in older adults.”

Between 2004 and 2017, it found, bone fractures associated with walking leashed dogs more than doubled among U.S. residents 65 and older. Nearly 8 in 10 who suffered fractures were women, and the most commonly broken bones were hips, wrists and upper arms.

The dog-walking fractures were reported in a public database published by the U.S. Consumer Product Safety Commission, which records injuries reported at a nationally representative sample of about 100 emergency rooms nationwide. The number, which increased from 1,671 in 2004 to 4,396 in 2017, rose at a rate significantly higher than the overall number of fractures did, said co-author Jaimo Ahn, an associate professor of orthopedic surgery at Penn Medicine.

Just why is unclear, although the senior population has grown as a percentage of the U.S. population. But Ahn said he thinks other factors may be driving the increase. Baby boomers are more active than previous generations of seniors, he said. And although he said he knows of no data that quantifies this, he believes health-care providers are increasingly suggesting dog ownership as one way to improve health.

“We make all these recommendations about pets, and yet we don’t really understand if there are potential negative implications,” Ahn said. “There are things we should be aware of before saying, ‘Hey, you should get a dog and take your dog for a walk.’ ”

While a growing body of research is finding correlations between pet ownership and health and happiness, this area of study is new, and many studies lack robust sample sizes or controls. Some researchers say findings about the downsides of pet ownership get too little attention.

The University of Pennsylvania researchers, whose study was published Wednesday in JAMA Surgery, focused only on seniors, a group Ahn said they figured would be most vulnerable to this sort of injury and for whom broken bones can be particularly insidious.

People older than 65 who fracture their hips have a 20 to 30 percent chance of dying within a year, or “higher than if you have a mild heart attack or get diagnosed with a mild cancer,” Ahn said. That may be because frailer people are more likely to fall, he said.

Ahn emphasized that the study is not meant to discourage dog ownership — or dog-walking — among seniors. But, he said, health-care providers should discuss the risks with patients, and older people thinking about dog ownership should talk about the idea with friends, family and others who know them and their lifestyles well. Dog training is also important, he said.

“We occasionally see patients who are seemingly doing a good thing — trying to be active, taking their pet out and then having an accident they never anticipated,” Ahn said. “People go skiing and think they might get injured. But this is kind of surprising to them, and it turns their life upside down.”