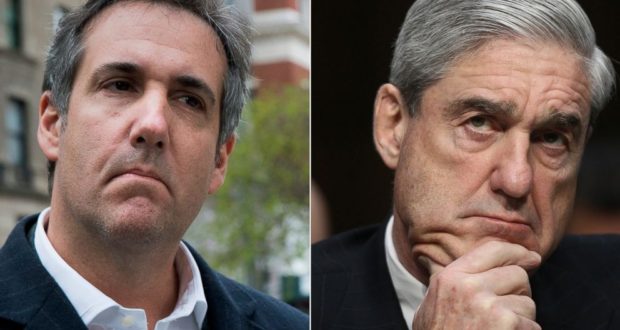 President Donald Trump looks — and is acting — rattled and encircled by the Russia investigation. And a series of fresh disclosures on Tuesday show there is every reason for him to feel threatened by the vast shadow it is casting over his life, business and presidency.Newly unsealed court documents detailing special counsel Robert Mueller’s activity reveal an investigative field of breathtaking scope and a prosecutorial machine that ratcheted quickly up in mid-2017.The search warrants targeting Trump’s ex-personal lawyer Michael Cohen offer a glimpse of the covert world of the probe. As is often the case with Mueller, they give only a tantalizing hint of the wider, yet still hidden, puzzle.

In court filing, Robert Mueller’s team says it’s very busy this weekBut such disclosures are almost never good news for Trump.There is enough to explain from Tuesday’s reveal why the investigation must be weighing on Trump’s spirits, and driving his angry Twitter outbursts.The vast breadth of the investigation by various jurisdictions also could offer a rich seam for Democratic House chairmen should they eventually subpoena primary evidence uncovered by Mueller and other prosecutors.And the release underlines that various investigations that are penetrating deep into Trump’s business, personal and political life are likely to be haunting the President for years to come — even after Mueller has left the stage.

READ: Newly released Michael Cohen court pages of warrants make clear that the investigation into whether the Trump Organization is implicated in the campaign finance case involving his hush money payments to women before the 2016 election is still open blacked-out pages at the end of one document under the title “The Illegal Campaign Contribution Scheme” almost certainly contain details of Trump’s interactions with Cohen prosecutors from the Southern District of New York believe those elements need to be kept out of the public eye suggests that their investigations — which have already indirectly implicated Trump — are not over.”They are not done. We have seen this in filings over and over again,” Preet Bharara, a former US attorney for the Southern District of New York, told CNN’s Tapper. So Trump cannot yet be sure whether his family members or top business associates in his firm could face criminal jeopardy. For the President, who seeks to exert dominance over every room, situation or relationship, the lack of control over the fate of his own clan and the business that bears his name as prosecutors bear down must be close to intolerable. Some legal observers see the work of the Southern District as Trump’s most perilous legal front, even more so than Mueller’s look at whether there was coordination between Trump campaign aides and Russia and whether the President obstructed justice to cover it up. While a sitting President cannot be indicted, according to current Justice Department guidance, Trump cannot be certain that he will not be prosecuted for campaign finance violations when he eventually leaves office.”If I was Donald Trump, I would be scared,” Democratic Rep. Ted Lieu of California, who sits on the House Judiciary Committee, said on CNN’s “The Situation Room.”The fact that prosecutors have already endorsed Cohen’s statement that he made the payments in violation of campaign finance laws at the direction of Trump means “there may be another shoe to drop,” said Bharara.”There may be other people who are assisting or who are conspiring, up to and including the President, and they haven’t decided how they want to proceed on that,” he added.

Michael Cohen warrants show how the FBI can unlock your phone and track your movementsTuesday’s documents also contain more evidence that Trump associates, in this case Cohen, appeared to have at least indirect connections to powerful Russians.They show that Cohen was paid more than $500,000 through his company as a business consultant from January to August 2017 by Columbus Nova LLC., an investment management firm that is linked to Russian national Viktor Vekselberg.Vekselberg is an oligarch — with ties to Russian President Vladimir Putin — who is under US sanctions regarding election interference.Columbus Nova said in a statement that neither Vekselberg nor anyone outside the firm had been involved in the decision to hire Cohen or to provide funding for his work.Cohen, who will go to jail in May after he admitted lying to Congress and for tax and fraud offenses, was not charged with unlawfully acting as an unregistered foreign lobbyist. But he is far from the only Trump associate to have suggestions of links that can be traced back to prominent Russians. Many of those Trump allies have been caught by Mueller trying to hide such relationships.The question of whether foreign influence and quid pro quos were in play during the Trump campaign for the presidency, and early in his administration, gets to the heart of what Mueller is charged with investigating.

Play VideoDocs show Mueller investigated Cohen long before raid 02:07Methods used by investigators to track Cohen, including state-of-the-art techniques targeting Apple devices, and the revelation of their sweep through the lawyer’s emails and telephone communications may fuel Trump’s fury about what he sees as the special counsel’s “witch hunt.”They also suggest that Mueller and his counterparts in New York may know a lot about the communications of people around Trump during parts of the 2016 campaign and early in the presidency.The documents show that Mueller had shown probable cause that Cohen had committed a crime to obtain warrants for two email accounts as far back as the summer of 2017, nine months before FBI agents acting on behalf of New York prosecutors raided Cohen’s office and residences.Trump’s siege mentality is unlikely to be helped by the simultaneous publication Tuesday of a double page spread in his hometown newspaper, The New York Times, revealing his complicated financial relationship with Deutsche Bank.Although the article did not show any illegality, it is the kind of unflattering deep dive critique of his personal and business practices that Trump abhors.Given the avalanche of revelations, it’s not surprising that the President is sometimes prone to isolated outbursts of fury directed at Mueller.”THIS SHOULD NEVER HAPPEN TO A PRESIDENT AGAIN!” Trump tweeted out of the blue on Saturday.Tuesday’s revelations also provided the context against which the President stood in the White House Rose Garden and claimed the real “collusion” in US politics was between social media companies opposed to conservatives.Trump praised Brazilian President Jair Bolsonaro — a leader with autocratic tendencies in his own image — of buying into his “fake news” narrative.”It seems to be if they’re conservative, if they’re Republicans, if they’re in a certain group, there’s discrimination, and big discrimination,” Trump added.Claims that the President is being muffled on social media hardly seem credible given that he has 59 million Twitter followers and can set the political agenda by banging out a few characters.It’s also notable that Mueller has indicted three Russian entities and 13 Russian nationals in connection with Moscow’s operation to use social media to interfere in the 2016 election, sow political discord and elect Trump.

Rosenstein staying on at Justice Department ‘a little longer’ than anticipatedWashington has been on edge for several weeks over expectations that Mueller is getting toward the end of the road.But there was a new wrinkle on Tuesday with the news that Deputy Attorney General Rod Rosenstein, who has overseen much of the Mueller probe, is not yet ready to leave his job.Rosenstein had been expected to leave in mid-March, now that a new attorney general, William Barr, who is not recused from the Russia probe like his predecessor Jeff Sessions, has taken office.Rosenstein will now stay “a little longer” than originally anticipated.A source familiar with the matter told CNN’s Pamela Brown that Rosenstein is waiting for Mueller to deliver his report to Barr.Rosenstein sees himself as the “heat shield” since he appointed Mueller, and could be in position to take the “hit” if controversy explodes when the report drops, the source said.

White House misses Democrats’ deadline to turn over docsWhile Trump may feel increasingly isolated, there are new indications that Democrats who have launched their own vast investigation against Trump world will encounter significant difficulties.The White House has missed a House Judiciary Committee deadline to turn over scores of records related to an investigation over whether Trump abused power.Some former officials who received letters from the committee requesting documents, including former White House counsel Don McGahn and former deputy counsel Annie Donaldson, are referring them to the White House.Republican aides said the committee had gotten responses from only eight of the 81 officials who had received letters from the committee earlier this month, and a ninth had mailed documents, though they had yet to be received.Democrats painted a more positive picture, but the speed bumps were a sign of the tortuous road of subpoenas and legal challenges ahead as House Democrats face White House resistance.People outside the government, however, are more exposed to subpoenas than others in the administration, as they cannot wage long fights citing executive privilege concerns as an excuse not to hand over documents.

Previous: How Exercise Improves Gut Bacteria
Next: Health effects of eggs: Where do we stand?