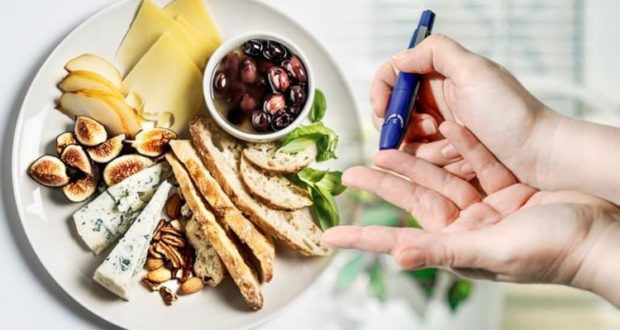 According to the American Diabetes Association (ADA), 30.3 million adults in the United States live with diabetes, and the condition is the seventh leading cause of death in the U.S.

In type 2 diabetes, a person’s body is unable to properly use insulin to absorb sugar from the blood into cells.

Cheese loaded with fat and salt is a contentious subject when it comes to diabetes and health in general.

While many people enjoy it as part of their diet, the ADA recommend reduced-fat varieties over regular fat cheese.

The big problem with research into the effects of cheese is that many studies receive backing by dairy organizations.

Often, it is not clear how much a funder is involved in the design and interpretation of a particular study. Public mistrust of these studies is unsurprisingly high, particularly when they make bold claims that counter public health advice.

A recent study adds fuel to the fire by showing that both regular-fat and low-fat cheese improve insulin sensitivity in prediabetic rats. Dairy Farmers of Canada funded the study.

For the study, Catherine Chan — a professor in the Faculty of Agricultural, Life & Environmental Sciences at the University of Alberta in Edmonton, Canada — and her collaborators looked at how prediabetic rats fared on a diet of regular cheese compared with low-fat cheese.

The team fed the rats a high-fat diet for 4 weeks to make them prediabetic. Then they added either regular Cheddar cheese or low-fat Cheddar cheese to the diet of some of the rats for an additional 10 weeks. The rats in the control group received a low-fat diet throughout the study.

There were no differences in the levels of fasting blood glucose or fasting insulin after the rats had been on their respective trial diets for 10 weeks.

When the team tested how well the animals were able to regulate their blood sugar after an injection of insulin, the animals who received cheese in addition to a high-fat diet had results similar to those on a low-fat diet. However, the results were significantly different from those of the rats on the high-fat diet alone.

Chan explained the following about her results in a press release: “The cheese didn’t totally normalize the effects of insulin, but improved them. And it didn’t matter whether it was low-fat or regular cheese.”

Yet, when the team used a different test — the Oral Glucose Tolerance Test (OGTT), which measures blood sugar levels before and after a high dose of glucose — they found no difference in the way that the animals reacted.

This shows that in the prediabetic rat model used in the study, all the rats were able to deal with a spike in blood sugar in the same way, irrespective of whether they were on a low-fat diet, a high-fat diet, or ate cheese.

Chen and the team went on to look at an array of metabolites in the blood of the animals. They found that several phospholipids show similar profiles in the cheese-eating rats and the low-fat diet rats, while the levels were different in the high-fat diet rats.

Phospholipids are essential to maintaining healthy cellular function, and scientists have linked alterations in normal phospholipid levels to insulin resistance and diabetes.

While Chan concluded in the paper that “insulin sensitivity of rats was improved by cheese independent of its fat content,” she also addressed the elephant in the room in the declaration of interests section.

“A representative of Dairy Farmers of Canada reviewed the manuscript prior to submission but had no role with respect to study design, data collection, analysis or interpretation, writing of the manuscript and its final content, or the decision to submit the manuscript for publication,” she wrote.

It remains to be seen whether that is sufficient to dispel the controversy that surrounds studies with industry funding.

“The response is, ‘I don’t like it,’ so people either eat no cheese or eat regular-fat cheese and feel guilty about it,” she explains. “Cheese has lots of nutrients, and if you cut it out of your diet, what are you going to replace it with?”

“Right now it can be confusing when we’re told to cut fat from our diets. This study helps to provide a rationale for further studies in humans so that eventually, researchers can make more rational decisions about the dietary recommendations we give to people.”

While it is possible to establish a link between a factor, such as cheese consumption, and an outcome, such as the development of diabetes, it is not easy to prove the mechanism that connects the two factors.

Chan is not the first person to look at cheese and diabetes, although hers is one of the few studies trying to find out how exactly cheese affects the metabolism. It is also the first to make the bold claim that cheese consumption may improve insulin sensitivity.

The InterAct study was funded by the European Union Research Framework to investigate the interplay between genetics and lifestyle in the development of diabetes. A 2012 paper by the InterAct Consortium found total dairy intake had no positive or negative effect on diabetes risk.

The authors suggested a modest reduction in the risk of developing type 2 diabetes, possibly mediated by the saturated fatty acids or probiotic bacteria found in cheese.

Meanwhile the ADA, in their most recent update on the Standards of Medical Care in Diabetes, have lifted the restriction on sodium in the diet of those with diabetes. This brings the recommended daily levels of sodium for people with diabetes in line with the general population at 2,300 milligrams (mg) per day. They also acknowledge that there is not a single diet that fits all people with diabetes.

Whether that means regular cheese is going to be back on the menu is unclear at this point. Either way, the best course of action is to scrutinize who funds studies and how governments and associations develop nutritional advice.

Previous: Sleeping like a teen-ager again…
Next: A Survival Guide for the Trump White House