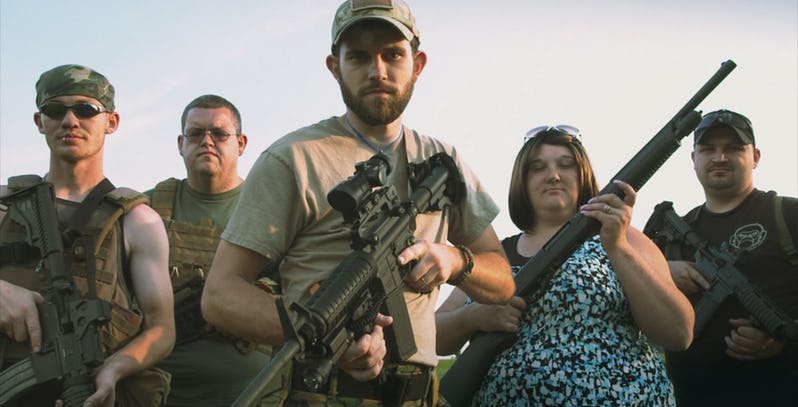 American reality TV series Doomsday Preppers is currently streaming on Netflix, showing a diverse group of survivalists each preparing for different catastrophic events that could throw the world into chaos—from economic collapses to biological warfare.

While many preppers make it to one-year survival time—according to the show’s Practical Preppers experts Scott Hunt and David Kobler—some preppers had better shots at survival, particularly when including likeminded survivalists in their plans. Let’s take a look at Doomsday’s top preppers, giving you 10 episodes worth binging this weekend. Continue scrolling to keep reading

Season 2 of Doomsday Preppers introduced us to hunter and homemade ammunition maker Bryan Smith, who is preparing for the total collapse of the US monetary system. Bryan has opted for an underground bunker with a generator that runs on alcohol alone, and has stockpiled thousands of cans of freeze-dried food, and close to a tonne of rice and beans. To protect his preps, Bryan has a couple-hundred thousand rounds of ammo, along with the capability of easily producing another 150,000 if required. Previously living in the jungles of Costa Rica and wrestling alligators, Bryan has seen it all and is certainly one to want by your side on doomsday. His prepping, which Bryan explains is like having a “lift raft” so as to not live in fear, earned him a top score of 16 months initial survival time.

9 John Adrian—’Taking From The Haves’

John Adrian is an inventor living in the pacific Northwest, fearing the chaos and depths to which humanity might sink under any widespread apocalypse. Since he believes there are problems with bugging out during a crisis, John has turned his cliffside manor into a technological fortress which can keep rampaging survivors away, so as to protect his preps—the have-nots will not be “taking from the haves”. John’s first ring of security is his house, which sits in the hills above town and is surrounded by woods.

Like fellow prepper Bryan Smith, John has firearms to deter they breach his military-grade gate and shatterproof windows. While John is reminded he can’t protect the entire house by himself, Practical Preppers also scored him 16 months initial survival time.

Jimi Falcon believes that because of dwindling resources and failing economies, a “top dog country” like China or Russia will invade the US, causing WWIII. In preparation, Jimi moved to a secluded stretch of land a mile high into the Rocky Mountains and seven miles from the nearest town. Everything in Jimi’s life is part of his survival plan, from his two cats to the location of his home in Montana—built to withstand the western-state’s cold and unforgiving climate. The springs and creeks surrounding his home double as a source of water as well as financial security, since they are rich in previous metals like gold—which Jimi believes is valuable during a geopolitical crisis as cash money may become irrelevant. While he can use gold to barter for food, Jimi also stockpiles dehydrated and canned food, and plans to hunt and live off deer, whilst training his two cats to also hunt for birds and small mammals. After living the prepper lifestyle for 25 years, Jimi knows how to maximise his location, lending him a score of 16 months initial survival time.

For Craig Compeau, there’s something a little more his small Alaskan hometown of Fairbanks than surviving  and fending off grizzly bear attacks—a total . Craig wants to bug-out since he believes the small town easily controlled by thousands of troops, should the US martial law and strip citizens of their basic freedoms in contain angry mobs. “It’s going to get really ugly, really fast; a lot of mayhem, chaos blood in the streets,” Craig says in season 2. Instead of a bunker, Craig plans to escape to a hidden  100 miles from his home, accessible only by a boat ride along the river, which itself is hazardous daily, though Craig is at an advantage since he knows how the river. Craig also practices his bug-out plan in its a year with his youngest daughter, contributing to his top 17 months initial survival time.

Retired Army Officer Rod Godfrey has built a military-style command and control centre in his home to protect himself from apocalyptic superstorms. Since scientific experts have determined that due to manmade global warming oceanic temperatures are on the rise, there is the potential stronger and more frequent storms. To combat natural disasters based upon global climate changes—such as high winds, tornadoes, hurricanes and subsequent flooding—Rod specifically purchased a property that was 1,200 feet above sea level; this also provides stronger signals for Rod’s 20 different radio and communication support equipment.

Since the property is surrounded by the Appalachian Mountains, Rod has added two 50ft antennas that allow him to receive voice, data and satellite information from around the world, allowing him to monitor global events in real time. Rod has also assembled a neighborhood call-tree system—a prearranged organisational structure with Rod at the centre—to quickly disseminate information among friends and family. His experience in operating the communication hub, in addition to the two prepper vehicles decked out with state-of-the-art communications equipment, contributes to Rod’s top score of 18 months initial survival time.

Next, we have nautical prepper Captain Bill Simpson—a US Merchant Marine Officer and an off-the-grid desert island survivor with decades of boating and expedition sailing experience. Never to be found in the same place twice, Bill’s half-million dollar safehouse, which he spent six years single-handedly building, is actually the Captain’s sailboat, the Iron Maiden. Hiding out in the middle of the ocean is the only way Bill believes his family will be safe from his greatest fear: a geomagnetic storm with the potential to demolish the national electrical grid. The Captain’s boat is made from steel, protecting the integrated circuits and electronics inside from the magnetic pulse of a solar storm. The Iron Maiden is also bullet-proof, built twice as strong as similar boats in size and can carry ten tonnes of supplies, and as many as ten people—it really is a “fortress at sea”, lending Bill a top score of 18 months initial survival time.advertising

4 “The Colony”—’Don’t Betray The Colony’

Demonstrating the value of numbers when it comes to safety and survival, “the colony”—a community of likeminded preppers with wide-ranging expertise—plan to stick together on doomsday. Former wildlife trapper Jeff Man is among the group, and owner of the 25 acre ranch turned prepper compound. In fear of an economic collapse, Jeff joined forces with a professional survivalist and former Marine to lead the colony, which will be “self-contained and self-reliant” when society collapses. The compound itself has sufficient shelter (sea containers for each family) and 300 chickens, 15 cows, goats, a warehouse full of food, and an abundance of wild boar in Central Florida which can be hunted. The colony’s impressive stockpiles, regenerating food sources, security and vast community of preppers earns them a top score of 19 months initial survival time.

Rick and Jane Austin gave up their idea of the American dream to move off-the-grid and prepare for an impending disaster—an electromagnetic pulse that could knock out the national electrical grid and throw the world into chaos. In just four years, the couple turned 53 acres of land in the Appalachian Mountains into a high-yielding prepper compound, with several natural water sources and livestock.

At the centre of their survival plan is a single prep that will provide them with enough food, medicine, sanitation and even defense—a ‘camouflaged food forest’, with mini ecosystems pollinated by typical honeybees. The pair have also set up a few defenses to protect their preps from marauders, including Osage orange shrub with long, tire-flattening thorns surrounding the property, and an extremely potent homemade pepper spray at the front (and only) entrance of the compound. Rick and Jane’s sustainable and fortified property—requiring a minimal workload to produce their own food, water and electricity—earns them a top score of 20 months initial survival time.

If any preppers prove that bugging-out is a great doomsday option, it’s Paul and Gloria Range of Floresville, Texas. The pair consider prepping for the apocalypse a full-time job, spending roughly 50 hours a week storing food, building fences and designing gadgets, all to improve their chances of survival after the end of days. Since Paul and Gloria believe a complete magnetic polar shift will cause a sudden climate in which no typical house could withstand, the duo have built their very own bug-out doomsday fortress from steel shipping containers—The Range Compound.

The property provides clear fields of fire, with views of up to 800 yards from the ground and 2 miles from the roof in all directions. In addition to the 50,000 pounds worth of canned food kept safe in a shipping container, the couple prepare up to eight meals a day so that enough food is put aside every week—adding an extra 11 post-apocalyptic days each time. Paul has also built and installed a system of windmills and solar panels to run the compound’s electricity. According to the show’s experts, this prepper paradise earns Paul and Gloria 22 months initial survival time.

1 Jerry McMullin—’There Will Be Chaos’

In Doomsday’s final season, we are introduced to retired risk-assessment analyst Jerry McMullin, who invested millions of dollars into the ultimate above-ground bunker in Colorado—formerly an AT&T relay station originally built to withstand a nuclear attack. Jerry believes that biological warfare in the US is imminent, and will cause millions of casualties and deaths. Since 60 percent of Colorado’s power comes from coal, Jerry believes a bio attack would immediately interrupt its distribution, quickly leading to shortages; so he has outfitted his prepper compound with five different means of power production, including solar panels and wind turbines, to keep his entire home running off-the-grid.

Like fellow preppers, Jerry is also worried about rampaging survivors, so he has built the bunker using steel and concrete to make his home structurally sound, with over 20 cameras on the property for added security. Rather than duct tape and plastic to seal windows in the event of a bio attack, Jerry has invested in shatterproof glass with electric shutters. To further secure his bunker from airborne toxins, Jerry has built an ultraviolet radiation chamber which he uses to filter all air coming in, using biological monitoring equipment and chemical test kits. The room also doubles as an emergency disinfection chamber designed to eliminate deadly micro-organisms, using ventilation systems that control the outside air. The above-ground bunker along with its ‘clean room’ will give Jerry and his family the greatest chance of survival, earning him a top score of 23 months initial survival time—and Doomsday’s biggest rating.