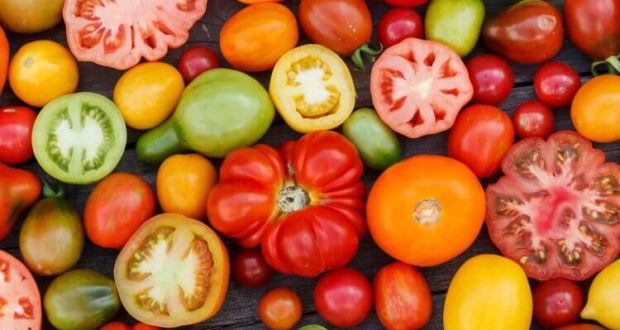 Reinventing the Tomato for Survival in a Changing World

In a borrowed van, Brad Gates of Wild Boar Farmssped south on Interstate 680 with hundreds of fuzzy tomato seedlings bumping around in the back, their trembling leaves, warmed by the sun, filling the cab with the smell of summer. It was one of a half-dozen deliveries on his to-do list.

Born and raised in Northern California, Mr. Gates has been organically farming tomatoes in the region for 25 years, working on small leased plots and introducing new varieties with cult followings, like the dark, meaty Black Beauty and the striped, rosy-pink Dragon’s Eye.

For most of that time, he sold his tomatoes to top restaurants, including Chez Panisse in Berkeley. But a few years ago he completely rethought his work. Galvanized by climate change, he joined a growing number of farmers who are trying to find a future for their threatened crops — in his case, the queen of the farmers’ market.

Mr. Gates now grows thousands of tomato plants each year, selling the young ones to local shops and the seeds all over the country through his website and catalogs, encouraging people to grow their own at home. He believes that the tomato’s survival and continued deliciousness depend on the plant’s diversity, and he considers breeding hardy, cold-tolerant and heat-tolerant varieties an essential part of his work — not just to provide food, but also to expand the number of places where the plant can flourish.Mr. Gates sells about 60 of his own open-pollinated varieties, many with especially bright colors and unusual shapes, and shares growing tips online.CreditWild Boar Farms

Many of the supermarket tomatoes that Americans buy are grown in Florida and California, and some arrive throughout the year from Mexico and Canada. Barry Estabrook chronicled the real cost of cheap, year-round, industrially farmed tomatoes in his 2012 book, “Tomatoland: How Modern Industrial Agriculture Destroyed Our Most Alluring Fruit,” which detailed the use of chemicals and the exploitation of workers in Florida.You have 3 articles left.Subscribe to The Times.

Since then, Mr. Estabrook said in an interview, conditions have been improved in Florida through the Fair Food Program, a coalition that protects workers and educates them on the effects of dangerous chemicals. “These tomato companies that used to treat workers like they were totally disposable are getting serious about competing with each other, because there aren’t enough migrant workers in this country,” he said. “It’s a huge crisis.”

Fresh dinner ideas for busy people who want something great to eat, with NYT Cooking recipes sent to you weekly.SIGN UPA flat of tomato seedlings, which Mr. Gates started in a greenhouse, is ready for the field.CreditErin Lubin for The New York Times

Mr. Gates, who usually works alone, is small-time, and has no interest in scaling up. He leases a greenhouse to start his seedlings and runs the seed business out of a closet in his living room. His dream is to open a nursery in nearby Sacramento and run it with the help of his family.

“I could never compete with somebody in the Central Valley using subsidized water, underpaid labor and pumped fertilizer, getting paid by the ton,” he said. “They stomp the market.”

Mr. Gates, 51, tends to speak in an outdoor voice and to gesture broadly with thick, cracked hands. He refers to shiny, red, out-of-season tomatoes, which he considers boggy and tasteless, as “water dogs.” He thinks the best tomatoes, both for the planet and for the palate, are homegrown or grown on small farms in summer.

He left landscaping and got his start in the tomato business in the early 1990s, when gnarly, bumpy, weird-looking heirloom tomatoes were becoming a hot seller at farmers’ markets. Mr. Gates grew a few hundred varieties, and sold the tomatoes in Oakland. Back then, his business was all about outrageous aesthetics.Mr. Gates, left, planting tomato seedlings in Winters, Calif., with the help of Paul Underhill of Terra Firma Farm.CreditErin Lubin for The New York Times

Tomatoes self-pollinate, but occasionally, Mr. Gates would come across a one-of-a-kind plant that had cross-pollinated naturally in his garden. The tomatoes they produced were colorful and lumpy, and some tasted very good. So he studied the breeding of tomatoes, searching for what he called the “holy grail.”

“That’s when someone grows it and someone bites it, and they’re satisfied,” he said. “They get the all-around ride.”

Like many tomato growers, he was scrutinizing his plants each year, selecting for sweetness, tang and savoriness, as well as productivity. He bred stripes and color into the tomatoes, bringing out any odd, unforgettable characteristics that would grab attention at market.

A quick glance at any commercial seed catalog will show that the tomato competition is fierce, with many hundreds of varieties. “In the last 10 years, tomatoes have changed more than in their entire existence,” Mr. Gates said.

About six years ago, he began to notice that the Northern California climate was becoming more intense and unpredictable. “A little struggle builds a tomato’s character, just like a person’s,” he said. “But it’s become a real roller-coaster ride out there.” Harvests weren’t just reduced; they were lost.

So Mr. Gates turned to selling young plants and about 60 varieties of seeds, alongside fully grown tomatoes, to help offset the uncertainties of farming. He quickly realized that he was no longer breeding tomatoes just for looks and taste, but for extreme tolerance in a rapidly changing, increasingly inhospitable planet.

The ancestor of the tomato plant we know is a hardy species that still grows as a bush in Peru and Ecuador, producing small red fruit about the size of a fresh pea. But there are about 15 other wild tomato species, each with its own potentially useful traits as researchers look to ways the tomato can adapt to drought, heat and more.

Roger T. Chetelat, a geneticist, oversees the tomato genetics resource center at the University of California, Davis — a public resource for plant breeders and researchers all over the world looking to tap into the plant’s wild genetics. For decades, he has studied the genetics of a tomato species native to the Atacama Desert in Chile.

“It grows in an extremely arid environment, and up until now breeders have not been successful with it, because it’s so different and so difficult to cross,” he said.

Mr. Chetelat recently planted tomatoes that have just a little piece of a chromosome derived from the Atacama species. He will study the plant’s response to drought this summer.

Mr. Gates, the California farmer, also tapped into the tomato’s wild genetics, in a less strategic way. “It was kind of inadvertent,” he said, “but I was always selecting the seeds that did the best under harsh weather conditions.”

He has produced the Lucid Gem, a marbled, beefsteak-like tomato that ripens from yellow to deep orange; it is unusually heat-tolerant, a trait he noticed among many of the orange-colored tomatoes he was breeding. And it thrives in what he called “the new summers from hell.”

Brad’s Atomic Grape is a sweet, almost creamy, psychedelic-looking cherry tomato that is robust in the way of its ancestors. It can flourish “in a sidewalk crack,” Mr. Gates said.

He has noticed patterns: The darker purple tomatoes tend to produce a lot of fruit, and withstand some disease. Some of the purple and pink fruit arrive early, which is ideal for growers in places with a short season, like Arizona or Nevada, where temperatures can rise too high for growing in the late summer.

And he has found that tomatoes rich with anthocyanin, the antioxidant that gives blueberries and blackberries their color, are protected from some fungus and disease that hit his other varieties.As Mr. Gates bred tomatoes, he noticed that many of his orange and yellow varieties were unusually heat-tolerant.CreditWild Boar Farms

Despite the tomato plant’s general preference for warm, dry summers, farmers around the world have developed clever, environmentally friendly hacks for growing excellent tomatoes in a variety of climates and soils. In Santa Cruz, Calif., Dirty Girl Produce uses the technique of dry-farming on Early Girl tomatoes, which, as their name suggests, bear fruit early in the season.

Dry farming isn’t entirely dry; it relies on fields soaked by rain, and cooler summers that lead to slow evaporation, along with plenty of work from the farmer to maintain its moisture, particularly in drought years. “It’s all about cultivating the soil,” said Joe Schirmer, Dirty Girl’s owner.

Under the right conditions, the Early Girl sends a strong taproot deep into the ground. And as the plant is stressed by lack of water, it puts all its energy into producing sweet, sharp, rich-tasting tomatoes with tough skins.

Despite all the challenges, Mr. Gates believes there’s never been a better time to grow tomatoes. Unlike decades ago, there are now passionate online gardening communities sharing notes with one another each season, allowing a beginner to learn quickly.

Mr. Gates has his own following online — small farmers and avid gardeners who grow his plants in the varied climates of Alaska, Idaho, Texas and Uzbekistan — and they share their experiences with him on Facebook and Instagram.

As abnormal weather becomes more normal, Mr. Gates wants to teach more gardeners how to confidently adapt, like the plants themselves, and manipulate changing environments with cheap, D.I.Y. frames and covers, which can provide shade and warmth for outdoor plants, as well as protection from freak hailstorms and rain.

“If you can, the best option for tomatoes has always been, and it still is, to grow some yourself,” he said, “whether it’s in a raised bed, a container or in the ground.”

As Mr. Gates pulled his van up to the curb to deliver hundreds of young tomato plants to Cotton Works in Los Gatos, the shop owner, Sara Fung, came out in a hurry to help carry them in. She has been selling his plants for about six years, and more than half of this year’s were already sold in a pre-order.

“Can you believe it, I already got a call this morning,” Ms. Fung said, pushing two flats of Husky Reds across the courtyard. “A lady wanted to know, are the tomatoes here yet? Where are the tomatoes?”

Previous: When You’re In Need of Some Healing, These 14 Bible Verses Can Help
Next: How loneliness affects your physical and mental health