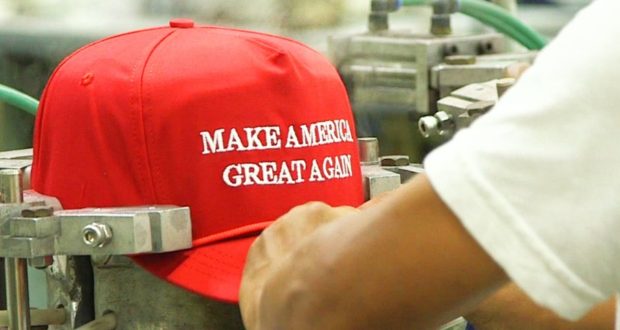 The Trump campaign announced it will be giving away its one millionth Make America Great Again hat, which has already been signed by President Donald Trump and will be personally given by him to the winner.

“We’re on the verge of selling our millionth hat,” Trump campaign national press secretary Kayleigh McEnany told Fox News during a recent visit to the campaign offices in Northern Virginia.

“In a fundraising email to supporters Tuesday, the campaign said anyone who contributed to the campaign that day would be automatically entered in the contest to win the hat,” Fox reported. “The president, the campaign said, signed the hat at his desk in the White House and plans to present it to the winner at an upcoming rally.”

The email promised not only hand-delivery of the hat, but a picture with the 45th president.

“Your signed red MAGA hat will be personally hand-delivered to you by President Trump himself at a Trump Rally,” the email said. “You’ll also get to take a picture with him!”

McEnany noted the one million figure only includes official hats sold by the campaign since Trump first announced he was running for president in 2015.

“There’s millions more if you count the fraudulent ones that are not official merchandise,” McEnany said.

Completing this poll entitles you to The Western Journal news updates free of charge. You may opt out at anytime. You also agree to our Privacy Policy and Terms of Use.

Los Angeles-based writer Joel Stein recently conducted an experiment to see what would happen if he wore a MAGA hat into one of the city’s most liberal restaurants, Café Gratitude, located a few blocks from the Paramount Pictures studio lot.

He recounted in a piece for Los Angeles Magazine he was surprised by the lack of response he received in what he describes as a “vegan hipster restaurant.”

“This is a place so liberal it has a Chief Inspiration Officer and supports regenerative agriculture. For a little while, it sold a red hat that said ‘Make American Grateful Again.’ Then customers demanded the restaurant stop, because it was taking the evil of Trump too lightly,” according to Stein.

He wrote that he did not want to give $25 to Trump’s re-election campaign so he purchased a knockoff Chinese-made MAGA hat for $8 on Amazon.

“The hate is so strong in me that I thought it was more ethical to support the Chinese government than Trump,” the writer explained.

Stein tried on the hat for the first time in his car after parking near Café Gratitude, checking himself out in his rearview mirror.

“I looked smug. I looked mean. I looked like someone I wanted to punch,” he recalled.

To the author’s surprise, when he entered the restaurant sat down, the wait staff treated him courteously and as he looked around with his hat still on, no one gave him a dirty look.

Stein enjoyed his lunch without incident.

He wrote: “Before I left, I asked the black waiter, Darick Thomas, how he felt about my hat. ‘I don’t care. At all. Really. At all! I look at a hat and that doesn’t tell me who the person is,’” he said. “‘I’m not against Trump. He says some smart things; he says some dumb things.’”

Another server, “a double-earring-ed Mexican” named Jose Reyes told Stein, “I was uncomfortable, but I wasn’t going to say anything.”

“Sometimes the best way to defeat the enemy is to give a smile and maybe a hand,” he added.

The restaurant staff told him there was one regular customer at the takeout counter, who saw him and asked, “Is that guy wearing a f–king MAGA hat?”

Stein’s trip to Café Gratitude followed a visit to a Texas county that had the highest percentage of Trump voters in the nation in 2016, as part of his research for a book about political tribalism.

For the week, he was there he did not pay for a single meal, partly “because the people were so nice that they fed me in their homes or paid the server before our check arrived.”

Despite his positive Texas experience, Stein’s surprising conclusion after his LA restaurant experiment was: “The far right has become so normalized that no one said anything to a guy in a MAGA hat at Café Gratitude. I Am Not Sure How Great That Is.”

Previous: Why I support Trump’s vision on border security
Next: Poor sleep can change your reaction to pain