Home » Politics » 15,000 Mexican Troops Just Showed Up at the US Border 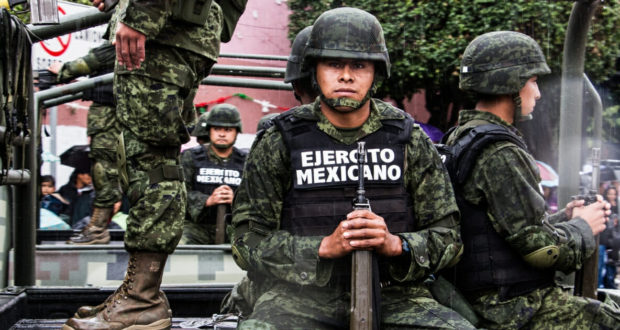 15,000 Mexican Troops Just Showed Up at the US Border

When President Donald Trump announced in late May that he would impose economically crippling tariffs on all goods imported from Mexico unless that nation did more to address the illegal immigration crisis at its shared border with the U.S., the threat was summarily dismissed by Democrats and the predominately liberal establishment media.

Of course, just days before those threatened tariffs were set to be implemented, Mexican authorities reached an agreement with the Trump administration to increase efforts at reducing the flow of illicit migrants transiting the nation to arrive at the U.S. border.

Now, a rather major move that almost certainly stems from this agreement has been announced — the deployment of thousands of Mexican troops to their side of the shared border with the U.S.

CNN reported on Monday that Mexico had announced the deployment of nearly 15,000 troops to that nation’s northern border.

“In the northern part of the country, we have deployed a total of almost 15,000 troops composed of National Guard elements and military units,” Mexican Defense Secretary Luis Sandoval said at a news conference Monday in Cancun.

The move came just weeks after Mexico announced the deployment of roughly 2,000 National Guard troops to the nation’s southern border with Guatemala to supplement the roughly 4,500 troops who were already there.

Guatemala’s border crossings with Mexico serve as points of entry for tens of thousands of Central and South American migrants headed toward the U.S. border with the intent to either enter illegally or game U.S. immigration laws to be allowed in.

The Hill reported on June 12 that the additional troops deployed to Mexico’s southern border were part of the deal struck to avoid the threatened tariffs.

Obviously, more needed to be done to address the massive flow of migrants still moving toward the U.S. through Mexico.

Are you glad to see Mexico stepping up to address the illegal immigration crisis?

Along with stepped-up enforcement of immigration laws in the interior of the country, it appears Mexico has now taken a big step toward addressing the crisis on their own side of the U.S. border.

Sandoval acknowledged in the news conference that the purpose of Wednesday’s deployment was to stem the flow of migrants, according to AFP.

He also admitted that the troops had been and would continue to detain and dissuade those migrants prior to them crossing into the U.S., something that nation hasn’t ever really done in the past.

“We have a total deployment, between the National Guard and army units, of 14,000, almost 15,000 men in the north of the country,” Sandoval said at the news conference, where he was joined by Mexican President Andrés Manuel López Obrador.

“Given that [undocumented] migration is not a crime but rather an administrative violation, we simply detain them and turn them over to the authorities,” Sandoval added.

Those authorities would be the National Migration Institute in Mexico.

AFP noted that the arrangement struck between the Trump administration and Mexican authorities to avoid the implementation of a 5 percent tariff contained a provision allowing 45 days for Mexico to achieve and display their progress toward the desired results sought by Trump.

All of these things — the initial deployment of National Guard troops to reinforce the border with Guatemala, followed by stepped-up enforcement of migration laws in the interior of the country, coupled now with nearly 15,000 more Mexican troops being sent to the border — suggest López Obrador has taken Trump’s threats seriously.

People can say that they will about the impact tariffs have on economies and consumers.

And in an ideal world, such action would not be necessary.

However, Trump has shown again and again that, distasteful as they may be, tariffs and the threat of tariffs are nevertheless extraordinarily effective tools to garner compliance and cooperation.

Mexico has never cooperated to this extent in addressing the illegal immigration situation, and this recent cooperation has only come about by way of Trump’s tariff threat.

Does anybody really think that a President Hillary Clinton, or Joe Biden, or Kamala Harris, or Elizabeth Warren, or Pete Buttigieg would ever achieve similar results, or even try to in the first place?

We are committed to truth and accuracy in all of our journalism.

Previous: Why We Shouldn’t Keep Shame To Ourselves
Next: Despite Outrage, Chick-fil-A Is Seeing Record Sales