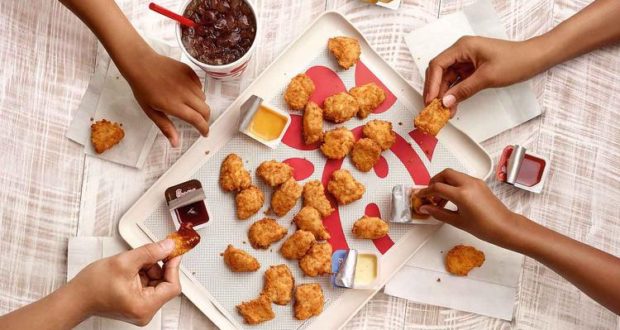 To some politicians, Chick-fil-A is controversial, with officials in places from San Antonio to Buffalo, New York, attacking the fast-food franchise for not keeping with the drumbeat of liberal ideology.

But to consumers, Chick-fil-A is increasingly becoming their choice for delicious fast food and excellent customer service, as shown by its move into the No. 3 spot in America among restaurant chains, according to Nation’s Restaurant News.

The publication said Chick-fil-A, despite being closed Sundays, racked up $10.46 billion in sales in 2018, leaving it trailing only Starbucks, at $20.49 billion, and McDonald’s, which topped the list at $38.52 billion.

Subway was fourth on the list, followed by Taco Bell in fifth place and Burger King in sixth place. Wendy’s, Dunkin’ Donuts, Domino’s and Panera Bread rounded out the top 10 list.

In its ranking based on 2017 sales, Chick-fil-A had been in seventh place.

Some experts said the chain’s growth is not ready to stop.

“Can they double that? I think that is a very reasonable goal for them,” Equity Research founder Mark Kalinowski told Business Insider.

“I would be surprised if they didn’t double that in the not-too-distant future. Can they reach $30 billion? I think that’s also a realistic goal if you give them enough time. And that should put them ahead of Starbucks,” he said.

Kalinowski said last year that Chick-fil-A is “the restaurant competitor with which McDonald’s … should most concern itself — and by extension, investors should, too.”

In its analysis of the chicken chain’s success, The Wall Street Journal said the secret is in the menu. While other fast-food chains make major menu overhauls, Chick-fil-A has kept its focus on chicken sandwiches.

“We’ve been pretty consistent in how, over multiple decades, we’re going to take it slow and steady,” Mark Moraitakis, a Chick-fil-A senior director, said. “It’s paid off for us.”

The Journal noted that Chick-fil-A averages about 12 menu changes a year since 2010, as opposed to an average of 49 by McDonald’s and 37 by Burger King.

Chick-fil-A has about 2,400 restaurants, roughly double its 2007 numbers, and goes from coast to coast — despite efforts in places such as San Antonio and Buffalo to bar the chain from local airports because of its supposedly “anti-LGBTQ behavior.” Officials in both cities pointed to Chick-fil-A’s donations to Christian charities such as the Salvation Army, the Fellowship of Christian Athletes and Paul Anderson Youth Home, which were described as “discriminatory.”

The company, which embraces traditional Christian values, has been targeted by liberal activists since Chief Executive Dan Cathy said he opposed same-sex marriage in 2012.

A Facebook page exists to rally those who want to boycott the chain. But even some critics hedge when it comes to the food.

Others say the company’s Christian values are just as important to its success as its great food and service.

However, one analyst said most customers care only about what happens in the restaurants where they go to eat.

“It does look like most consumers, for the most part, are looking the other way,” said Jeff Farmer, a restaurant analyst at Gordon Haskett Research Advisors.

Musician Bradley Ackerman of Nashville, Tennessee, was among those to praise Chick-fil-A’s customer service.

“The wait is never too long. My order is never wrong,” Ackerman told The Journal.

Previous: 15,000 Mexican Troops Just Showed Up at the US Border
Next: The Tyranny of Workplace Food-Shamers