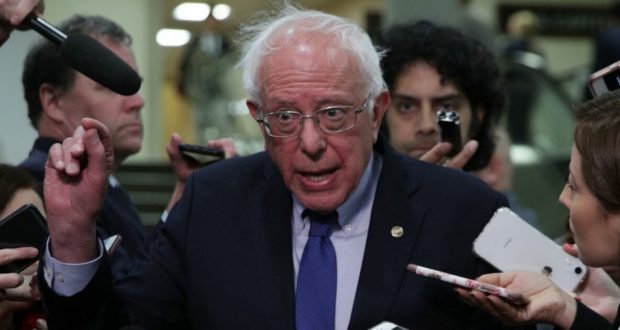 Walmart Set To Give Bernie Sanders the Cold Shoulder

Two campaigns will collide when Walmart holds its annual shareholders meeting on June 5, but the retail giant doesn’t plan to devote much time to either.

“These workers need and deserve a seat at the table,” the Vermont independent told The Washington Post.

“If hourly workers at Walmart were well represented on its board, I doubt you would see the CEO of Walmart making over a thousand times more than its average worker.

“Walmart workers are sick and tired of being paid poverty wages, while the Walton family is worth over $170 billion,” Sanders tweeted Tuesday.

Walmart, which often has celebrities at its annual meeting, will not roll out the red carpet for Sanders.

Shareholder proposals are relegated to the tail end of Walmart’s meeting. Last year, the gathering devoted about a half-hour to all of the proposals from shareholders.

Is this simply Bernie Sanders grandstanding?

“If Senator Sanders attends, we hope he will approach his visit not as a campaign stop, but as a constructive opportunity to learn about the many ways we’re working to provide increased economic opportunity, mobility and benefits to our associates,” company spokesman Randy Hargrove said in an emailed statement.

“Since the beginning, a cornerstone of Walmart’s culture has been engaging frontline associates in the management of the company, and we’re proud of the fact that 75% of our U.S. management associates began their career as frontline hourly associates,” the statement also said, according to Fox Business Network.

“At a time of deepening racial and economic divide and insecurity, hourly associates can guide a more fair, inclusive and equitable corporate ecosystem that bridges differences,” the proposal said.

Davis, who is also a leader for workers’ rights organization United for Respect, filed it.

“We really want Walmart to think about us — the lowly associates who, behind the scenes, are the ones bringing in the money,” Davis said.

Walmart is advising shareholders to oppose the proposal.

In 2018, Sanders introduced the Stop Walmart Act to prevent large companies from buying back stock unless they pay everyone at least $15 an hour, and to allow workers to earn up to seven days of paid sick leave.