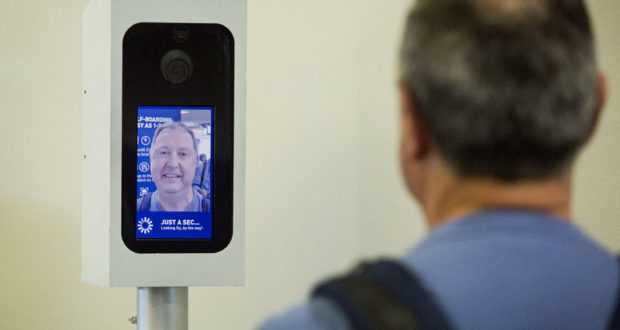 We Should All Be Worried About Facial Recognition Boarding Passes

Let’s be honest: Air travel already feels pretty invasive. Between the full-body metal detectors, police dogs sniffing for bombs, and pat-downs by TSA agents, it’s no wonder we all dread going through the airport security line. (By the way, these four letters on your boarding pass will guarantee you a longer wait.) But those measures are not what privacy advocates are sounding the alarm about. According to them, we should all be more worried about a new safety feature that’s heading to airports nationwide.

If you have flown with JetBlue or Delta airlines lately, you might have had the option to board the plane by smiling for a camera. However, you might not have known that these systems were the first phase of the Department of Homeland Security’s (DHS) “Biometric Exit” program, which was rolled out back in June 2016.

Now, customs and airline officials say this technology may soon replace our paper boarding passes for good. But how does it work, exactly, and should we be concerned about our privacy? Here’s what you need to know.

How do facial recognition scans work?

Right now, facial recognition scans are used to verify passengers’ identities when they board international flights. Rather than handing over their passports and boarding passes at the gate, travelers can pose for a picture taken by a small camera. Computers will then compare that photo with passport and visa photos saved in government databases. This helps the U.S. Customs and Border Protection (CBP) identify passengers and make sure they are cleared to board the plane, officials say.

Where is this technology used?

Facial recognition scans can already be found at airports across the country. JetBlue’s “e-gates” have scanned 150,000 faces in the past two years, and Delta has an entire “biometric terminal” in Atlanta that scans your face at check-in, bag drop, security, and boarding. But because the government database’s scope is limited, most facial-recognition tech is only used for passengers on international flights, not domestic ones—for the time being.

What are the benefits of face recognition?

Supporters of this new tech say that facial recognition scans are more convenient for passengers, considering they no longer need to keep track of paper boarding passes. The scans can also speed up the boarding process; Delta reports that its scanning system helps to board international flights nine minutes faster, saving an average of two seconds per passenger. What’s more, it’s argued that the systems can help boost national security by confirming who can—and can’t—board a plane.

For privacy advocates like the ACLU, facial recognition scans raise several red flags. Once a photo is taken of you, it is stored by the DHS or State Department. From there, not only can your photos be used for law enforcement purposes, but they can also be swiped by online hackers.

Customs claims it deletes the photos after 12 hours, and JetBlue and Delta say they never keep the photos taken of their passengers. But that doesn’t mean you should let your guard down. Just recently, the DHS revealed that photos of U.S. travelers were compromised in a massive cyber attack. Find out the other secrets your TSA agent isn’t telling you.

Do I have to get a facial recognition scan?

Thankfully, no. Officials say that this feature is voluntary, and passengers always have the choice to opt out. “This isn’t a surveillance program, in that travelers know that their picture is being taken and it is at places where physical travel documents are checked,” Daniel Tanciar, CBP’s deputy executive director of entry and exit transformation, told the Washington Post. If you do decline, however, make sure your travel documents are handy, and prepare to stand in a separate (possibly slower!) line, according to the Post.

What does the future hold for facial-recognition tech?

It looks like these systems aren’t going away anytime soon; in fact, the program is expected to expand in the coming years. The DHS is currently working to make face recognition a common feature across all TSA security checkpoints, including for domestic flights, says John Wagner, CBP executive.

And JetBlue’s chief product officer, Michael Stromer, said in a 2017 interview that the airline might one day use this tech to personalize staff interactions with travelers—including deciphering a customer’s mood. The next time you step into an airport, make sure to avoid these mistakes before your next flight.

Previous: Tea tree oil can help you with this ear infection
Next: Why We Shouldn’t Keep Shame To Ourselves