Home » Exercise & Fitness » Back pain: The ‘good, safe’ exercises to alleviate back pain in just 12 weeks 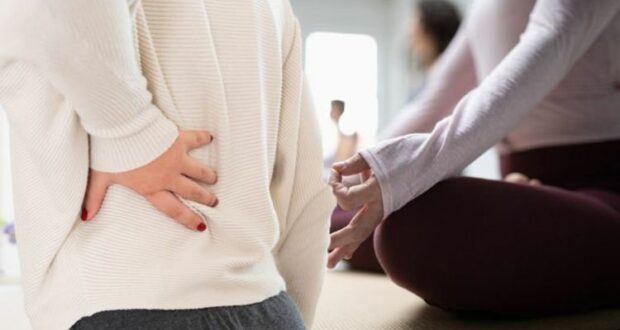 Back pain: The ‘good, safe’ exercises to alleviate back pain in just 12 weeks

In the largest U.S. randomised controlled trial of yoga to date, published by the Archives of Internal Medicine, yoga classes were linked to better back-related function and diminished symptoms from chronic low back pain.

Back-related function was better and symptoms were diminished with yoga at 12 weeks; and clinically important benefits, including less use of pain medications, lasted at least six months for both yoga and stretching, with thorough follow-up of more than nine in 10 participants.

In the trial, 228 adults in six cities in western Washington state were randomly assigned to 12 weekly 75-minute classes of either yoga or stretching exercises or a comprehensive self-care book called The Back Pain Helpbook.

Participants in the trial typically had moderate – not severe – back pain and relatively good mental health, and most had been at least somewhat active before the trial started.

The class participants received instructional videos and were encouraged to practice at home for 20 minutes a day between their weekly classes. Interviewers who didn’t know the patients’ treatment assignments assessed their back-related function and pain symptoms at six weeks, 12 weeks, and six months.

Dr. Sherman and her colleagues conducted a smaller follow-up study that found yoga effective for easing chronic low back pain. “In our new trial,” she said, “we wanted both to confirm those results in a larger group and to see how yoga compared to a different form of exercise of comparable physical exertion: stretching.”

Both the yoga and stretching classes emphasised the torso and legs:

“We expected back pain to ease more with yoga than with stretching, so our findings surprised us,” Dr. Sherman said. “The most straightforward interpretation of our findings would be that yoga’s benefits on back function and symptoms were largely physical, due to the stretching and strengthening of muscles.”

“Our results suggest that both yoga and stretching can be good, safe options for people who are willing to try physical activity to relieve their moderate low back pain,” Dr. Sherman concluded. “But it’s important for the classes to be therapeutically oriented, geared for beginners, and taught by instructors who can modify postures for participants’ individual physical limitations.”

Commenting on the findings, Timothy S. Carey, MD, MPH, of the University of North Carolina, Chapel Hill, called Dr. Sherman’s study “an excellent example of a pragmatic comparative effectiveness trial,” noting that the Institute of Medicine has identified chronic back pain as a priority condition for such studies.

According to the NHS, for immediate relief of back pain, a hot bath or a hot water bottle placed on the affected area – helps ease the pain when back pain first starts.

“Cold, such as an ice pack or a bag of frozen vegetables, placed on the painful area can also help in the short-term,” added the health site.

Previous: The profound effects of exercise on the brain
Next: Amazon’s Stock Is Not Without Risk…