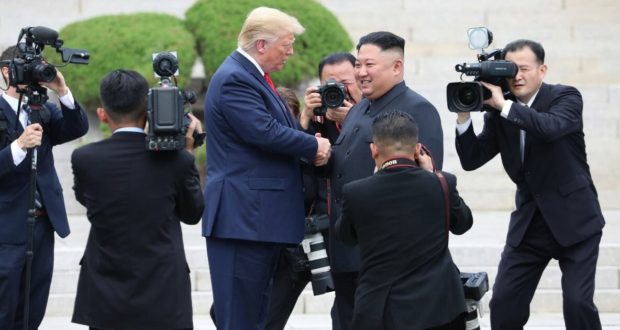 President Donald Trump made history on Sunday when he stepped foot in North Korea and became the first sitting U.S. president to do so.

Trump made the bold move just before an hour-long, closed-door meeting with North Korean leader Kim Jong Un, according to Politico.

The largely theatrical move was meant to signal that the two countries have once again agreed to start nuclear negotiations.

As Trump walked toward the demilitarized zone between North and South Korea from the south, the leader from North Korea made his way to the area from the north, Politico reported.

The two met in the middle where they shook hands and smiled.

Through an interpreter, Kim told Trump, “It is good to see you again.”

“I never expected to meet you in this place,” he added, according to the BBC.

The president said it was then that Kim asked him if he’d like to cross into North Korea.

Trump said he would be honored and took about 20 steps into the country.

The two leaders then went to a small building on the southern side of the border called Freedom House.

About 53 minutes later, Trump and Kim came out of the meeting where they announced that they would be appointing teams to restart nuclear negotiations.

The president told reporters, “This was a great day. It will be even more historic if something comes out” of it,” Politico reported.

Likewise, Kim told reporters, “This has a lot of significance because it means that we want to bring an end to the unpleasant past and try to create a new future, so it’s a very courageous and determined act.”

After the meeting, Trump invited Kim to the White House, which would be yet another historical moment.

This isn’t the first time, however, that the two countries have tried to discuss North Korea’s nuclear ambitions.

A February summit in Vietnam broke down after North Korea demanded the U.S. ease sanctions.

After the U.S. said it wouldn’t ease the sanctions, North Korea resumed its missile testing but still paused nuclear testing.

Previous: Biohackers Want To Upgrade Their Brains, Their Bodies And Human Nature
Next: What to know about flesh-eating bacteria infections