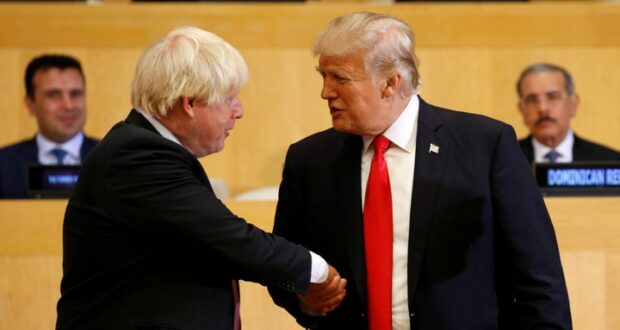 Johnson took office this week and replaces Theresa May, who failed to develop an acceptable plan to wean Britain away from the European Union as required by the Brexit vote. Trump said he called Johnson to congratulate him on his new job.

“We don’t do the kind of trade we could do with what some people say is Great Britain. And some people remember a word you don’t hear too much is the word England – which is a piece of it. But with the UK, we could do much much more trade. And we expect to do that OK,” Trump said.

Trump called Johnson a “good guy, a good friend of mine,” adding that “he will be a good prime minister.”

“He has what it takes, they needed him for a long time,” Trump said, according to Politico.

Are you glad Britain has a new leader?

British officials confirmed the two leaders spoke, and that they are expected to meet at the G-7 summit in Biarritz, France, in late August.

The leaders “agreed that Brexit offers an unparalleled opportunity to strengthen the economic partnership between the UK and United States,” the British statement said, Reuters reported.

Trump and Johnson “both expressed their commitment to delivering an ambitious free trade agreement and to starting negotiations as soon as possible after the UK leaves the EU,” the statement said.

Earlier in the week, Trump shared an upbeat assessment of Johnson at a conference for young conservatives sponsored by Turning Point USA, Politico reported.

“We have a really good man. He’s going to be the prime minister of the U.K. now, Boris Johnson,” Trump said to the Teen Student Action Summit.

“Both these leaders have their own style, but they have similarities and I think they have clear vision of what they want to accomplish.”

Woody Johnson said the new prime minister’s past criticism of Trump that dates from 2015 is no barrier to a good relationship.

“I think he respects Boris for the same. Boris is going to call it as he sees it. But first of all, I don’t think it’s long-lasting and second of all I think they have so much more in common in terms of what they want to accomplish for the good of both of our nations.”

“The UK is our most important ally, both in security and also in prosperity, so you’re very important and he knows that, and he’s made some comments regarding a free trade agreement and putting the UK at the front of the line,” Johnson said.

Previous: What is a healthy blood pressure?
Next: This New York Jets Player Has Saved 90% of His Income