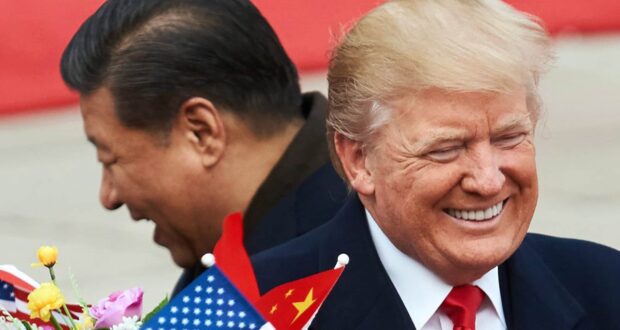 The trade war with China just hit a turning point…

As the conflict started to hit new heights, according to Fox News, with President Donald Trump’s declaration of new tariffs on Friday and a Sunday statement that he was considering declaring a national emergency that could freeze business relationships between American companies and China, the Chinese government signaled Monday it might have had enough.

In a statement, China said it wants a “calm” end to hostilities — and Trump sounded very open to the idea of cooling things down.

According to Fox, the latest development came after White House officials on Friday said Trump was considering levying even more tariffs on Chinese goods being sold in the United States.

Trump, in France for the G-7 summit of the world’s top industrial countries, also published a Twitter post mocking media coverage of international events — including the trade war with China.

In France we are all laughing at how knowingly inaccurate the U.S. reporting of events and conversations at the G-7 is. These Leaders, and many others, are getting a major case study of Fake News at it’s finest! They’ve got it all wrong, from Iran, to China Tariffs, to Boris!

In China on Monday, according to Fox, Chinese Vice Premier Liu He told a state-controlled newspaper that “China is willing to resolve its trade dispute with the United States through calm negotiations and resolutely opposes the escalation of the conflict.”

Do you think the U.S. will win the trade war with China?

“We believe that the escalation of the trade war is not beneficial for China, the United States, nor to the interests of the people of the world,” he said.

While the United States stock market has taken a battering during the trade unpleasantness, the pain hasn’t been restricted to the U.S.

According to Fox, Asian markets started tanking as soon as trading opened on Monday, and the value of the Chinese yuan slipped again. (The U.S. has already officially accused China of manipulating its currency as a weapon in the trade fight.)

“It’s just another manic Monday. Asian markets tanked and the yuan hit an 11-year low after US President Donald Trump ramped up his trade war with China by imposing more tariffs on half-a-trillion dollars worth of imports.

“The decision on Friday stunned investors, hammering European and Wall Street stocks, while safe havens such as the yen and gold surged.

“To add to the mayhem, Trump also called for US firms to leave China and demanded that the Federal Reserve cut interest rates.”

Apparently, the pressure had the desired effect.

On Monday, according to MSN, Trump said the Chinese had called on Sunday and “said let’s get back to the table.”

President Trump said he believed China wanted to make a trade deal after contacting U.S. trade officials overnight to say it wanted to return to the negotiating table.

President Trump also said he wanted to see a strong Iran and was not seeking a change of leadership in Tehran. pic.twitter.com/UpHEsyICr6

“I think we’re going to have a deal, because now we’re dealing on proper terms,” Trump said. “They understand and we understand.

It’s worth remembering that the U.S. and China appeared to have a deal all but finished back in May. The Chinese government reversed course at the last minute, as Reuters reported at the time, sparking the three-month trade war that has hurt both countries economies.

But if Liu’s statement about wanting a “calm” end to the conflict can be believed, it could well mark the end to a situation that put the whole world on notice of a possible global recession.

Given the strength of the United States economy during the Trump administration, and Democratic hopes to use any potential downturn against Trump in the 2020 presidential election, it could have wide ramifications in domestic politics too.

But if Liu’s statement is just another ploy, like the deal that fell apart in May, the conflict is likely to get even deeper.

Either way, the trade war has definitely hit a turning point.

Previous: Vaping Kills Too?!
Next: What To Know About Kidney Pain