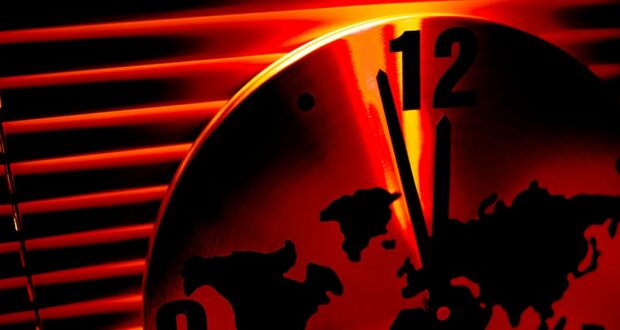 The Uncomforatble Truth About Doomsday Capitalists

In his pitch to potential buyers, Larry Hall touts his condominium’s high ceilings and spacious living rooms. Then there are the swimming pool, saunas and movie theater. But what really sets the development apart, in his view, is its ability to survive the apocalypse.

Mr. Hall has converted a former military nuclear missile vault into a luxury condominium built 15 stories into the Earth’s crust. He is a leader among a new group of real estate developers investing in the nation’s central prairies and Western foothills: doomsday capitalists.

Americans have, for generations, prepared themselves for society’s collapse. They built fallout shelters during the Cold War and basement supply caches ahead of Y2K. But in recent years, personalized disaster prep has grown into a multimillion-dollar business, fueled by a seemingly endless stream of new and revamped threats, from climate change to terrorism, cyberattacks and civil unrest.

Bunker builders and brokers have emerged as key players in this field. And they see the interior of the country, with its wide-open spaces, as a prime place to build. Aiding them is history. During the Cold War, the military spent billions of dollars constructing nuclear warheads and hiding them in underground lairs around the nation, often in Kansas, Nebraska, Oklahoma and New Mexico. Those hideaways, emptied of their bombs, are now on the market and enterprising civilians are buying them (relatively) cheap and flipping the properties. Eager customers abound.

The 12 apartments in Mr. Hall’s Survival Condo, as he calls it, begin at $1.3 million. When he started selling the condos around 2011, he said, all the units sold within months.

To Mr. Hall, and to many in his field, this is a calling, not just a business. “I’m saving lives,” he said during a recent visit to his bunker, the exact location of which he insisted be kept under wraps. He entered the building’s elevator as it began its long descent into the earth. “To me, this is something to feel good about.”

“Fear sells even better than sex,” Professor Hoopes said. “If you can make people afraid, you can sell them all kinds of stuff,” he added, “and that includes bunkers.”

But survival homes now dot America’s interior, pulling in clients who are part of a larger movement of people who are choosing to retreat from society, or at least ready themselves for escape.

Kiki Bandilla, 52, a health insurance agent in Castle Rock, Colo., distanced herself from people she called “Chicken Littles,” who think “the sky is falling.” She characterized her membership at a survival community called Fortitude Ranch as a reasonable insurance policy.

In Las Vegas, an underground bunker built by the Avon Cosmetics executive Girard Henderson, featuring a midcentury chef’s kitchen and a wood-burning fireplace, is on sale for $18 million.

Here in Kansas, one couple has been selling old missile silos through a company called 20th Century Castles. In Colorado, a former weapons compound featuring half a mile of underground tunnels is listed on the real estate site LoopNet for $4.2 million.

In Indiana, Robert Vicino, a California property developer, has converted a former government site into an underground mansion called Vivos that he says is “like a very comfortable four-star hotel.” He has also purchased 575 former weapons cellars in South Dakota that he is turning into a subdivision he calls the “largest survival community on earth.”

Bunker clients say they are united not by ideology — liberals, conservatives and political agnostics exist side by side in this world — but by a belief that global forces have left societies increasingly vulnerable to large-scale disaster.

Tom S., 69, who works in information technology and lives outside Atlanta, purchased one of the Vivos cellars after becoming increasingly concerned about political unrest, among other things. His 2,200-square-foot bunker is also a great jumping-off point for exploring the Rockies, and he and his wife plan to use it as a home base when he retires, he said.

(For now, if disaster strikes, the plan is for them to pack the car and make the roughly 26-hour drive from Georgia to South Dakota.)

Tom declined to make his last name public, citing concern that he would be harassed online, but he said the purchase had the incidental effect of putting him in touch with his political opposites.

He identifies as conservative but his bunker neighbor is liberal, and they once had a spirited conversation about President Trump.

In Kansas, Mr. Hall, 62, of Survival Condo, has become one of this industry’s best-known businessmen, mostly because of the complexity of his operation and his savvy promotion efforts.

The condo sits down a country road, past grazing cattle, a wire fence and a guard in fatigues gripping a rifle. Visitors enter through a concrete dome; below sit the apartments, outfitted with fake windows made of digital screens; the subterranean swimming pool; a dog park; a weapons cache; and storerooms for food. Buyers pay monthly condominium fees of about $2,600.

Mr. Hall has outfitted the building with five air filters, connected it to the electrical grid, drilled a well to the local aquifer, and set up diesel generators, a wind turbine and a battery bank, all for backup power.

The doors that cap the entire operation weigh 16 tons, and close behind visitors with a booming slam.

Mr. Hall spent a career building data centers for defense contractors like Northrop Grumman. After 9/11, shaken by the attacks, he hatched a plan to build protected information hubs; when he saw that the market was glutted, he turned to protecting people.

From his defense days, Mr. Hall knew that the government had been selling off its underground weapons warehouses. In 2008, he purchased one for about $300,000 and told his wife, Lori, and young son that they were moving from Florida to Colorado so he could start his bunker business. That silo soon became the Kansas Survival Condo.

Ms. Hall, sitting in a cushioned chair in the bunker living room, said friends warned her against the project. But she admired her husband’s creative spirit and threw her support behind him. “It’s hard to be the first one,” she said.

The site had initially held an Atlas-F missile, an intercontinental weapon with a warhead hundreds of times more powerful than the bomb dropped on Nagasaki. The missiles, built and buried around 1960, lasted only five years in their hide-outs before they were removed and converted into space rocket launchers, or scrapped entirely. The military had decided to replace them with more sophisticated missiles and abandon the bunkers. The Air Force eventually turned the empty vaults over to the General Services Administration, which auctioned them off to civilians.

The Survival Condo vault, which cost the military millions to build, was sold to a civilian in 1967 for $3,030 and passed through several owners before making it to Mr. Hall.

(Today, officials use websites like gsaauctions.gov to sell unwanted government property. Receiving bids recently: a commercial dryer from NASA, for $100; a painting of Old Tbilisi, for $150; and a parcel of a missile site in Wyoming, for $3,000.)

It cost Mr. Hall $20 million to remodel what was in fact a hole in the ground, money he raised from pre-sale of the units. Because few banks issue loans for bunkers, his clients financed their apartments themselves, wiring him the cash.

More recently, he has purchased a second Kansas vault. He mostly broke even on the initial project, he said, and swears that interest in the second one “is picking up.” Among the potential buyers, he said, are representatives of the Saudi Arabian military, who have asked him to draw up plans for an on-site heliport and underground mosque.

But build-out of the new bunker, which is three times as big as the first, now occupies most of his time. There is so much to get done, he said, and the end could come any minute.

Previous: How To Take The Headache Out Of Finance
Next: “Get Rid Of Big Tech Once And For All “