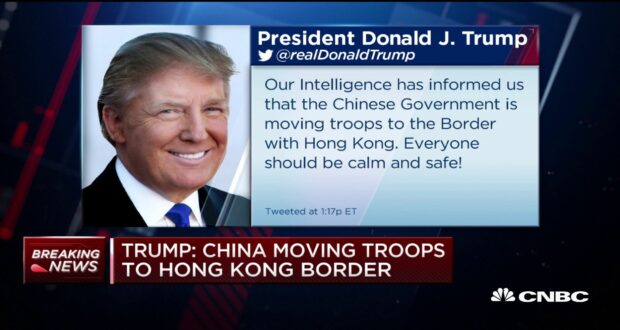 “Everyone should be calm and safe!” Trump said in a tweet on Tuesday, without providing details about when he received the information.

Trump’s tweet came amid increasing tensions in Hong Kong between the government and protesters. Activists clashed with police outside Hong Kong’s airport after a standoff over a man protesters beat alleging he was an undercover cop from the mainland.

The airport suspended check-ins for departing flights — its second straight day of major service disruptions — as embattled local leader Carrie Lam warned that the city risked sliding into an “abyss.”

What began as a largely leaderless effort to block legislation allowing extraditions to the mainland has expanded into a list of demands including investigations into police tactics and a direct vote to replace Lam. She has resisted calls to resign.

Over the past week, signs had appeared that China was stepping up preparations to mobilize mainland forces to quell the weeks-long uprising in Hong Kong.

State-run media posted videos this week of the People’s Armed Police, a paramilitary force specializing in riot control, assembling across the border in Shenzhen. A Chinese official with the agency overseeing the city used “terrorism” to describe the protests, invoking a term used to justify sending in forces to repress minority Muslims in the far west region of Xinjiang.

Previous: Explosion in Russia Releases Fatal Radiation
Next: Why NASA Is Flying A Nuclear Reactor To Space In 2022