Home » Exercise & Fitness » Can We Learn Something From The Japanese Diet? 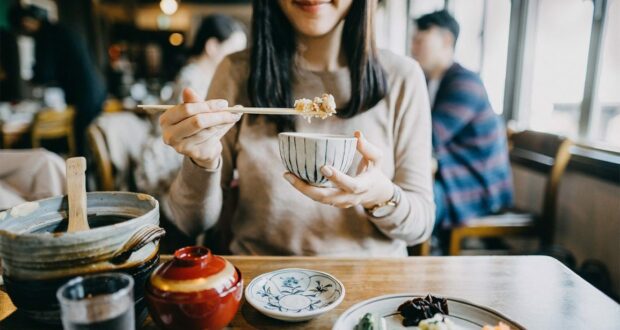 Can We Learn Something From The Japanese Diet?

Reflective of Japan’s own KonMari method, the Japanese diet is based on the principle of minimalism. The diet includes minimally processed whole-food and plant-based food without the addition of sauces and seasonings to avoid drowning out natural flavors. It consists of limited animal proteins and added sugars.

The Japanese diet can be considered the counterpart of the Okinawan diet, which originated from the eating habits of the inhabitants of the Ryukyu islands in Japan. The island’s people are known to have a long lifespan owing to its lifestyle of consuming grains, vegetables, fish, dairy and eggs.

But what exactly is the diet consist of ? Firstly, it allows the staple Japanese foods such as steamed rice, ramen, soba, udon noodles, that are served cold as well as in a broth. Secondly, it consists of seafood that should be steamed, raw and grilled. A wide range of soy foods such as tofu, soy sauce, miso and tamari among others can be eaten.

When it comes to vegetables and fruits, it has to be eaten raw, steamed, pickled or in soups. Sea vegetables, an integral part of the traditional Japanese diet, has to be eaten in the same way. Tempura is also another great option.

Here are a few benefits that contribute to the longevity of Japanese people according to Healthline.

The traditional elements of the Japanese diet are effective in protecting the body against several common chronic diseases, especially type 2 diabetes and heart disease, among others. Fruits, vegetables, fish but low in sugar, fat and animal protein are important to keep heart disease at bay, which is why the Japanese diet is recommended to people with heart problem.

Though the Japanese diet involves a high intake of salt, heart disease is still kept at bay. In one study conducted with 33 men, 91 percent of them had reduced risk factors that could possibly end in type 2 diabetes since they were following the Japanese diet.

The Japanese diet does not encourage eating beyond 80 percent of fullness. Also, it restricts calories since the portions are small. The food is also boiled, grilled and steamed without fats and added sugar, hence maintaining weight is an easy by-product of the diet.

Fruits, vegetables and soya products are full of fiber that aids digestion. Insoluble fiber adds more bulk to the stool and prevents constipation. Soluble fibers are fed on by the gut bacteria, which reduces Irritable Bowel Syndrome and inflammation.

Japan is known to have many people who live beyond 100 years. Okinawa, a Japanese island has been designated as a blue zone, which means that the region has people with high longevity. The only difference between the Okinawan diet and the Japanese diet is that it has more sweet potatoes and less fish and rice.

Previous: Can We Save Hawaii’s Coral Reefs?
Next: The Impeachment Push Is Falling Apart