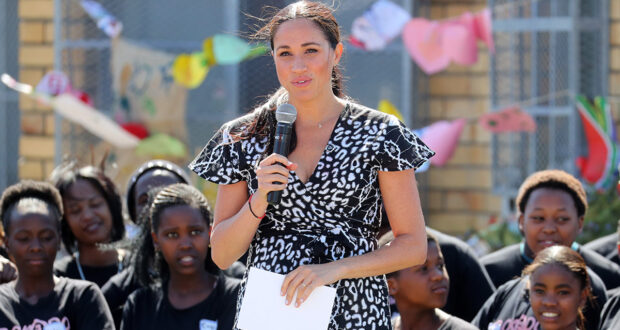 On Monday morning, the Duchess of Sussex, 38, and Prince Harry arrived in Cape Town with baby Archie Harrison Mountbatten-Windsor; the parents later made their first appearance without 5-month-old Archie in Nyanga.

For the occasion, Markle chose a black-and-white printed wrap dress that perfectly suited the first day of her tour: the Dalitso dress from fair-trade company Mayamiko, which was sourced and made in Malawi.

The causal look retails for only £69 (around $85) but has already sold out online.

Meghan paired the look with her favorite black espadrille wedges by Castañer ($120) and styled her hair in a sleek and simple low ponytail.

She was seen dancing and talking with locals, gave a speech and even put on a red beaded bracelet that read “Justice.”

During the tour, the royal family is expected to tackle issues of violence against women in the area. “Harry and Meghan will begin their tour in a township in Cape Town where the royals will view a workshop that teaches children about their rights, self-awareness and safety and which provides self-defense classes and female empowerment training to young girls in the community,” according to a statement.

Markle’s low-key look is just the beginning of a parade of outfits. The Duchess and her family are expected to attend 35 engagements in just 10 days during their extremely busy royal tour of southern Africa.

Perhaps her next look will be some of her own designs from the recently launched clothing line to benefit Smart Works charity.

Previous: Millennials Are Putting An End To Big Oil
Next: Can We Save Hawaii’s Coral Reefs?