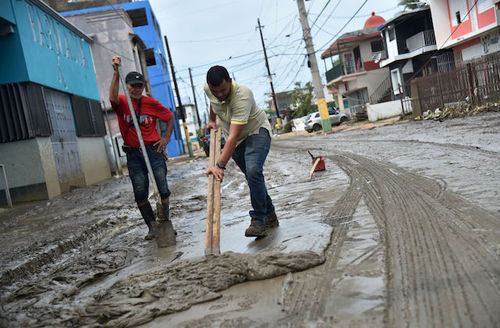 Authorities in Puerto Rico and the U.S. Virgin Islands on Sunday urged residents to prepare for heavy winds, rain and damage as Tropical Storm Karen rolled toward islands still recovering from the devastation of historic Hurricane Maria two years ago.

The National Weather Service issued a Tropical Storm Watch for Puerto Rico and the U.S. Virgin Islands. Karen is expected to pass near or over both Tuesday, after moving across the eastern Caribbean Sea on Monday. Maximum sustained winds were near 40 mph with higher gusts.

Still, the storm is a blip on the weather map compared to the ferocity of Maria. But the island’s power grid remains unstable, and hundreds of thousands of Puerto Ricans live in housing still in disrepair from the fury of Maria’s 175-mph winds and rampant flooding.

Puerto Rico Gov. Wanda Vázquez Garced said an emergency management plan has been activated across the island of 3.2 million people.

“I urge citizens to be calm but vigilant and update their family plan,” Vázquez posted on Twitter.

The island’s emergency management agency posted a similar warning: “Remember that keeping calm and being informed is essential to make the best decisions in times of emergency.”

The National Weather Service warned that much of the islands will see 2 to 4 inches of rain; 6 inches could fall in isolated areas. Flash flooding and mudslides are possible, the advisory said.

Maria, a Category 5 storm, killed more almost 3,000 people on Puerto Rico alone and was blamed for $90 billion in damage. The recovery and aftermath drew controversy, including arrests on fraud charges of some government leaders.

Puerto Rican leaders and President Donald Trump conducted heated exchanges, often via social media, over the amount of help the island received from the federal government.

Thousands of homes remain battered or abandoned since Maria destroyed a wide swath of the island in 2017.

Many residents live in poverty and could not afford to rebuild. Puerto Rico’s halting recovery was among the issues that forced former governor Ricardo Rosselló to resign the post in August.

The island dodged what could have been another devastating storm when Hurricane Dorian battered parts of the Virgin Islands but mostly stayed away from Puerto Rico during its drive through the region just weeks ago.

Karen is the 11th named storm in one of the busiest storm seasons on record in the Atlantic Basin. Elsewhere, the center of Tropical Storm Jerry is expected to pass near Bermuda late Tuesday.

Previous: An OTC Medication Turned This Woman’s Blood Black
Next: Millennials Are Putting An End To Big Oil