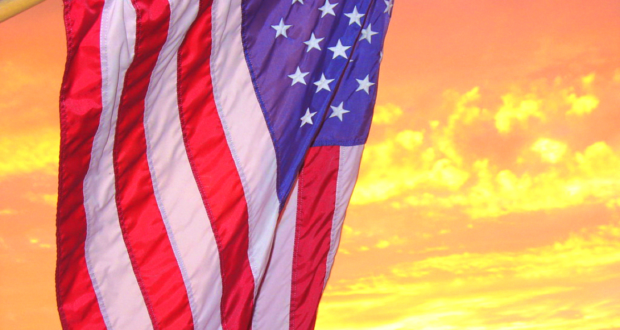 A fundraising visit from President Donald Trump had the bustling city of Los Angeles looking messier than usual Tuesday evening at rush hour.

Tensions flared as pro-Trump and anti-Trump demonstrators congregated outside the Beverly Hills Hotel where Trump was set to host a fundraiser and welcomed the president to the city — whether with open arms or mockery and jeers.

Seemingly innocuous displays on both sides, from the singing of Trump’s praises to anti-Trump signs and the flying of a massive baby Trump caricature balloon, soon descended into flag burning and street brawls.

The escalation of tensions began as anti-Trump protesters called for “revolution” and, egged on by a bullhorn, members of the group set fire to an American flag.

“America was never great,” the anti-Trump protesters chant in a video posted by the U.K. Daily Mail.

One member of the group can be heard screaming, “We burn the American flag because the Amazon is on fire.”

A man can be seen attempting to secure the burning flag. But the man was met with physical resistance, and fights erupted.

“You have two extremes, groups that are fighting like that over this flag,” KCBS reporter Chris Holmstrom said in a video posted to Twitter that included footage of one of the fights.

“There’s pro-Trump supporters, there’s also antifa as well,” he added, referring to so-called anti-fascist demonstrators. “You can see just how intense this is out here. These two groups aren’t getting along tonight at all.”

Unwilling to stoop to the level of physical violence, Trump supporter Gregg Donovan told KCBS he had never seen such hatred emerge from peaceful political demonstrations.

“All my years, I’ve never seen that,” Donovan said.

“I was very disappointed in both sides. I took a neutral stance. I just stood there with my sign the whole time.”

“The burning of the flag really hurt,” he added.

Unlike the violent outbursts that rocked Portland, Oregon, last month during standoffs between conservative demonstrators and antifa protesters, however, police officers appear to have detained the involved parties each time a fight broke out on Tuesday.

Authorities were not able to successfully maintain peaceful relations, and were soon forced to permanently separate the opposing groups.

No arrests or major injuries have been reported at this time.

Trump’s fundraising visit came as something of a surprise in progressive California — a state which no Republican presidential nominee has won since George H. W. Bush in 1988.

But according to the GOP, Tuesday night’s event, one of several fundraisers across the state this week that are expected to bring in as much as $15 million total, was meant to send a message to the state’s radically progressive leadership.

“By showing up to a fundraiser deep in the belly of the beast, one is saying: ‘I don’t care what the liberal politicians are saying and I want to show my support for him publicly,’” California’s Republican National Committeewoman Harmeet Dhillon told The Associated Press.