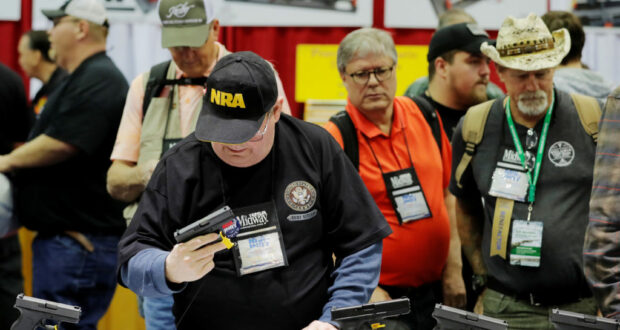 Over the past two decades, Democrats have been pushing very hard to do away with the Second Amendment. Both nationally and at state levels, many Democrats have pushed legislation to restrict gun ownership as much as possible. In some states, such as New York, Maryland and California and cities like Chicago, Baltimore and Los Angeles, Democrats have succeeded in passing numerous restrictive anti-Second Amendment laws and ordinances.

Ironically, those locations are among the nation’s leading areas with the highest incidence of gun violence, yet, Democrats are unwilling to admit the direct relationship between gun control and gun violence.

During the reign of Barack Hussein Obama, there was a huge push for more gun control laws, with some Democrats actually stating that their goal was to repeal the Second Amendment. Consequently, gun and ammunition sales hit record highs for several years. Membership in the National Rifle Association (NRA) also soared with the threat of anti-gun legislation being pushed by Democrats.

After the election of Donald Trump, it appeared that NRA membership and their finances followed the decline in gun and ammunition sales. With a pro-Second Amendment president, fears about gun bans diminished.

However, after a rash of crazies using guns for mass shootings, the call for stricter gun control, up to and including gun bans, have taken on a whole new level of political activity. Not only are most Democrats using gun violence to push more anti-gun legislation, but some RINOs have begun to join them. Consequently, membership in the NRA has again risen. In April 2019, it was reported that NRA membership had not only has NRA membership recovered from the decline after Trump took office, but the membership has reached the highest level ever, with about 5.5 million members.

Many believe that over the past few decades, it was the political influence of the NRA that has been the strongest voice to protect the Second Amendment rights of American citizens. The political influence of the NRA has been a bane for Democrats who are dead set on disarming the American people as part of their push to make America a socialist nation.

The anti-NRA mindset among Democrats has grown to such a point that many now believe that it should be illegal for anyone to join the membership, as reported:

Twenty-eight percent (28%) of Democrats say Americans should be prohibited by law from belonging to pro-gun rights organizations like the NRA, a view shared by 15% of Republicans and 10% of uanffiliateds.

Among all likely voters, 23% favor declaring the NRA a terrorist organization in their home community, while 18% think it should be against the law to belong to pro-gun rights groups like the NRA.

Only 13% believe NRA members are more likely to commit a crime with a gun. A plurality (47%) says members of the group are less likely to commit such a crime, while 28% think the level of gun crime by NRA members is about the same as in the population at large. Twelve percent (12%) are undecided.

This coincides with much of the anti-America, anti-Constitution, anti-rights, anti-freedom agenda. It’s all part of their plan to turn America into another Venezuela, Iran, North Korea, Russia or China!

Previous: Schiff Lies Multiple Times about Whistleblower to Push for Trump Impeachment
Next: Scientists Have Made Another Major Discovery About Early Humans