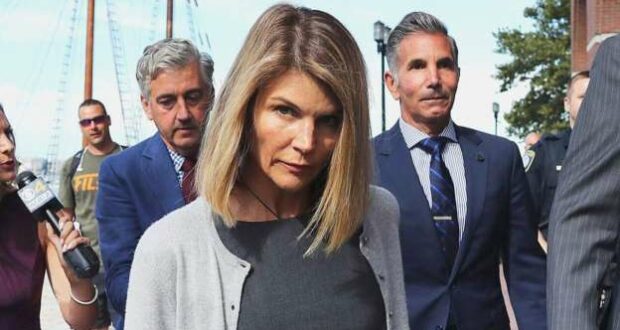 A Boston grand jury has returned additional charges against 11 of the 15 parents charged in the college admissions scandal. Lori Loughlin and her husband, Mossimo Giannuli, are among the parents affected in the third superseding indictment, Yahoo Entertainment can confirm.

According to the U.S. attorney’s office, Loughlin, Giannuli and nine other defendants are accused of conspiring “to commit federal program bribery by bribing employees of the University of Southern California (USC) to facilitate their children’s admission.

In exchange for the bribes, employees of the university allegedly designated the defendants’ children as athletic recruits – with little or no regard for their athletic abilities – or as members of other favored admissions categories.”

The charge of conspiracy to commit federal programs bribery provides for a sentence of up to five years in prison, three years of supervised release and a fine of $250,000 or twice the gross gain or loss, whichever is greater.

“Today’s charges are the result of [an] ongoing investigation in the nationwide college admissions case,” U.S. Attorney Andrew E. Lelling said in a statement Tuesday. “Our goal from the beginning has been to hold the defendants fully accountable for corrupting the college admissions process through cheating, bribery and fraud. The superseding indictments will further that effort.”

Prosecutors allege that the Full House actress and her fashion designer husband paid bribes totaling $500,000 to get their daughters, Olivia Jade and Isabella Giannulli, into USC as crew recruits despite neither girl having rowed.

The new conspiracy charge is only against parents, like Loughlin and Giannuli, who pleaded not guilty to the initial indictment. Parents who have already pleaded guilty or accepted plea deals, like Felicity Huffman, do not face additional charges. Huffman pleaded guilty to one charge of fraud conspiracy.

Huffman was sentenced to 14 days in prison, 250 hours of community service and a fine of $30,000. The Desperate Housewives star reported for sentencing at a federal correctional facility in California last week.

“If she’s convicted … we would probably ask for a higher sentence for her than we did for Felicity Huffman,” he said in an interview earlier this month. “I can’t tell you exactly what that would be. The longer the case goes, let’s say she goes through to trial, if it is after trial, certainly, we would ask for something substantially higher. If she resolved it before trial, something lower than that.”

He praised Huffman for taking responsibility for her actions, saying “she handled it in a very classy way.”

“If people take responsibility for their conduct and they take responsibility for their conduct early on, then it will probably go better for them,” he shared. “What I value in the Felicity Huffman sentence is that I think it sent a clear message to the other parents involved that there really is a good chance that if you’re convicted of the offense, you are going to go to prison for some period of time because the least culpable defendant who took responsibility right away, even she got prison.”