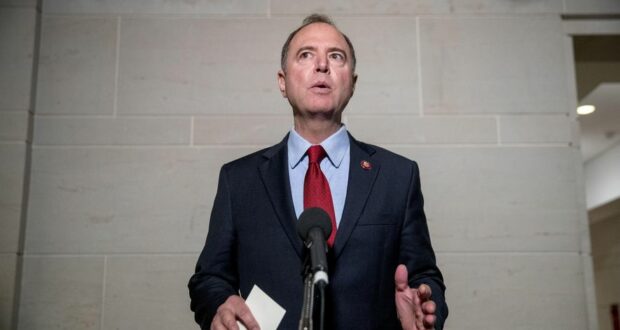 How much do you know about Rep. Adam Schiff (D-CA)?

He was born in Massachusetts in 1960 but his family moved to California while he was in high school. He obtained a degree in political science from Stanford, a university known for it’s liberalism. He went on to obtain a law degree from Harvard Law School (same law school that produced Barack Obama, Michelle Obama and Elizabeth Warren – need I say more?).

After graduating law school, Schiff worked as a prosecutor for the US Attorney’s Office in Los Angeles.

In 1996, at the ripe old age of 36, Schiff was elected to the California State Senate, but only after he tried twice to win a seat in the California State Assembly, and failed both times. After just 4 years as a state Senator, Schiff was elected to the US House, taking office in January 2001 and has been a member of the House ever since. Basically, Schiff is a career politician and a California Democrat as well, both of which are strikes against him.

When Democrats won control of the House in the 2018 election, House Squeaker Nancy Pelosi placed Schiff as Chair of the House Intelligence Committee, a placement that many sane people questioned then and still question.

Since Donald Trump was inaugurated as America’s 45th President, Schiff has been one of the top Democratic critics and antagonists of Trump. He has made no effort to hide the fact that he hates and despises everything about Trump and that he has been determined to remove Trump from office.

Now, Schiff has been caught in more lies about Trump, as reported:

The New York Times disclosed Wednesday that the whistleblower had approached Intelligence Committee staffers “days before” filing a complaint with the intelligence community’s inspector general.

In a Sept. 17 interview on MSNBC, Schiff said “we have not spoken directly with the whistleblower.”

The Daily Beast’s Sam Stein asked Schiff on the “Morning Joe” program: “Have you heard from the whistleblower?

“We have not spoken directly with the whistleblower,” Schiff responded. “We would like to.

“But I am sure the whistleblower has concerns that he has not been advised, as the law requires, by the inspector general or the director of national Intelligence just how he is supposed to communicate with Congress, and so the risk to the whistleblower is retaliation.”

How many times will Schiff be allowed to keep lying about his accusations and charges against Trump before someone holds him accountable for his lying.

Now consider that Schiff, a proven habitual liar is the Chair of the House Intelligence Committee. Sorry, folks, but that is not very reassuring because if he lies this much about Trump, what else is Schiff lying about that could impact America’s safety and well-being?

It’s time to get the liars out of Washington and it needs to start with Schiff, followed by Pelosi, Warren and Waters.