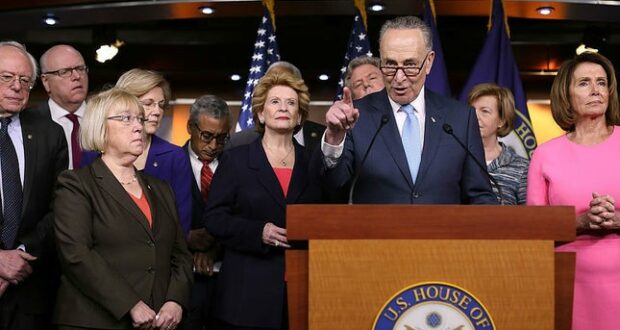 House Democrats are once again running through the halls of the nation’s capital building like chickens with their heads cut, not having a clue what they are doing.

While millions of American workers are anxiously waiting for the House to approve the newly revised NAFTA agreement with Canada and Mexico, House Democrats are too busy on another Trump witch hunt. Meanwhile, tens of thousands of jobs lie in the balance, but Democrats could care less. After all, they have proven time and again that they don’t give a DARN about the American people and what’s best for them.

Prompted first by a whistleblower report that Rep. Adam Schiff saw but lied about seeing, the Chair of the House Intelligence Committee (there’s an oxymoron for you), is busy trying work the rest of the politicians in Washington DC into an emotional and irrational frenzy (kind of like concert fans) that he hopes will lead to the impeachment of President Donald Trump. Since seeing the whistleblower report, Schiff went public on at least four different occasions saying he hadn’t seen it. Even some of the Democrat-friendly media outlets had no choice but to call out Schiff on his lies, but it hasn’t deterred the California Democrat one bit.

Now, House Democrats, led by Schiff are claiming that Trump is guilty of obstruction of justice after Trump took action to block the testimony of Gordon Sondland, Ambassador to the European Union.

First let me point out that the reason Trump blocked his testimony is because Schiff has refused to release the testimony of another ambassador, to House Republicans. Obviously, Schiff doesn’t want House Republicans to know what was said in that testimony, leading many to wonder what he is hiding.

Secondly, some are laying the blame on House Squeaker Nancy Pelosi, as reported:

House Speaker Nancy Pelosi’s unfairness is delaying the cause of ascertaining the truth at the heart of the Trump-Ukraine controversy.

President Trump has at least a reasonable case to make in ordering Gordon Sondland, the U.S. ambassador to the European Union, not to testify on Capitol Hill about Trump’s policy toward Ukraine. Pelosi has not called for a formal vote to open an official impeachment inquiry, and because she has adopted no formal rules to govern such a probe, the executive branch’s claims of “privilege” (or quasi-privilege) are stronger than they would be otherwise…

Yet, if Pelosi insists on her kinda-sorta impeachment where she makes up the rules as she goes, the president can make a reasonable claim not just of ordinary confidentiality rights vis-à-vis diplomacy but also that his procedural defense rights are being abused. Pelosi thus is setting up a scenario that could involve a lengthy battle, both political and in court, to sort all this out. Rather than expediting the process, which of course would be in the public interest, Pelosi’s unjust, ad hoc approach makes it far more likely that this national nightmare will continue longer and be even messier.

Thirdly, if you recall during the congressional investigation into Operation Fast and Furious, Obama used his executive privilege to prevent various members of his administration, including then-Attorney General Eric Holder, from testifying before Congress, even when he and others were subpoenaed. Democrats at the time, including Pelosi and Schiff, fully supported Obama’s right to block the testimony and ignore congressional subpoenas. In fact, Holder was held in contempt of Congress, but Obama shielded him from any legal consequences.

The bottom line is this. According to Democrats, they can do no wrong, regardless of what the Constitution or federal law states, but when Republicans act by the letter of the law, Democrats go into a tizzy fit and yell foul and impeachment. In other words, there is no way they will allow Trump to do anything that they supported Obama in doing.