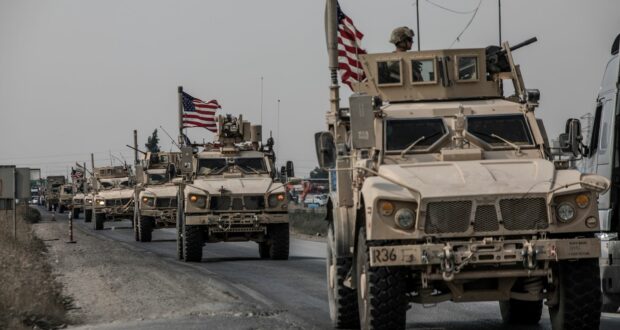 Was Trump Right in Withdrawing Troops From Syrian Border?

When President Donald Trump announced that he was withdrawing US troops from the Syrian border with Turkey, his enemies (Democrats, ‘sewage stream’ media and RINOs) instantly began attacking his decision. I saw and heard a number of them proclaim that Trump was allowing for the re-emergence of ISIS terrorism.

When Turkish forces launched their attack into Syria along the border to wipeout those who are considered enemies of Turkey, Trump was instantly blamed by all of his critics. Think about this! Is Trump really responsible for the actions of the Turkish government and their decisions? That’s as logical as claiming that guns are responsible for violence, not the people using them or making the decision to carry out the violence.

The ‘sewage stream’ media focused on reporting that all of the bloodshed occurring in Syria was solely Trump’s responsibility. Yet, that is NOT how the majority of the American people felt, as reported. Rasmussen Reports asked the following questions of likely voters from all political persuasions:

1*   Is the U.S. military overstretched these days, or can it adequately handle the number of missions it has?

2*   Do our political leaders send American soldiers into harm’s way too often, not often enough, or is the balance about right?

3*   Do you agree or disagree with the following statement – “It is time for us to get out of these ridiculous endless wars, many of them tribal, and bring our soldiers home. We will fight where it is to our benefit, and only fight to win.”

The response is NOT what the ‘sewage stream’ media and Trump haters would report or have you believe:

In defending his Syria decision on Monday, the president declared, “It is time for us to get out of these ridiculous endless wars, many of them tribal, and bring our soldiers home. We will fight where it is to our benefit, and only fight to win.” Fifty-eight percent (58%) of Likely U.S. Voters agree with Trump’s statement, according to the latest Rasmussen Reports national telephone and online survey. Just 20% disagree, while 22% are not sure.

Even 55% of Democrats agree with the statement, although it is important to note that Rasmussen Reports did not identify Trump as the source of the quotation in its question. Sixty-nine percent (69%) of Republicans and 50% of voters not affiliated with either major political party also agree. Democrats and unaffiliateds are more likely than GOP voters to be undecided.

Forty-four percent (44%) of all voters continue to believe that our political leaders send American soldiers into harm’s way too often, but that’s down from 52% two years ago and the lowest finding in regular surveying since January 2013. Only four percent (4%) think U.S. solders aren’t send into harm’s way enough. Thirty-eight percent (38%) view the balance as about right.

Just 38% believe the U.S. military is overstretched these days, also a new low. This finding ran as high as 57% as recently as three years ago but has been trending down since Trump’s election. Forty-three percent (43%) say the military can adequately handle the number of missions it has. Nineteen percent (19%) are undecided. This marks the first time in Rasmussen Reports surveying that voters who are comfortable with the military’s efforts outnumber those who think it is overstretched.

So, was Trump right or wrong about withdrawing US troops from the Syrian border and what he referred to as one of those endless wars? Is he allowing for the re-emergence of ISIS?

According to most voters, YES, Trump is right!

Secondly, it was announced at the end of last week that Trump plans on leaving a contingent force in the region to ensure that ISIS does not regain strength and continue their reign of terror. However, few of the ‘sewage stream’ media outlets are reporting on this, proving they are more interested in anti-American propaganda than they are in reporting the truth and real news.