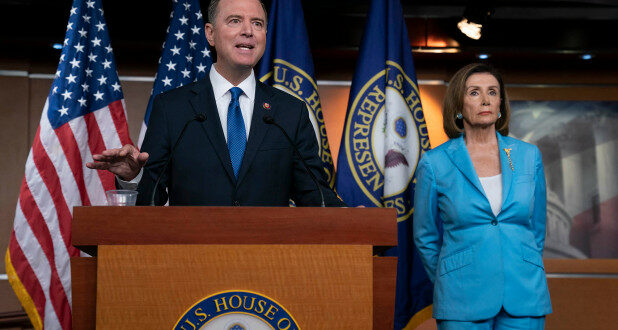 Many are starting to ask what’s the real story behind the Democratic effort to impeach President Donald Trump with the intent to remove him from office before the 2020 elections.

From the moment it was announced that Trump won the Electoral College vote, a number of Democrats boldly announced that they would do everything in their power to remove Trump from office. Among them were Rep. Nancy Pelosi (D-CA) and Rep. Adam Schiff (D-CA).

From the onset of the Robert Mueller special council investigation of Trump and Russia, Schiff regularly announced that he had overwhelming evidence of Trump’s collusion with Russia to win the 2016 election. Yet, after nearly 2 years of intensive investigation by Mueller and his hired team of hitmen, Schiff NEVER produced the evidence he claimed to have. It was his perfect opportunity to accomplish his goal of ridding the nation of Trump, but since he never produced said evidence, one can only conclude that he never had any and that he was just blowing hot air and lying as usual, but that’s business as usual for Schiff.

When it became known that Trump contacted Ukrainian President Volodymyr Zelensky to insist that he launch an investigation into the dealings of Joe and Hunter Biden, Schiff again began making loud declarations and promises. He was one of those instrumental in launching the current impeachment process after reviewing the information he obtained from the whistleblower. Then on at least four occasions, Schiff denied ever seeing the information, something that even Democrat-friendly media outlets had to admit were blatant lies.

Now, many Democrats and the sewagestream media are calling on the Democratic leaders of the House (Pelosi and Schiff) to call for an impeachment vote from the full house membership. One would expect that if Pelosi and Schiff were certain of their damning evidence against Trump that they would rush to call a full floor vote, but instead, they seem to be the very ones stalling such a vote, as reported:

America’s top two Trump-hating newspapers, The New York Times and The Washington Post, have now both called on Speaker Nancy Pelosi to hold a vote of the full House of Representatives to make the “impeachment inquiry” truly official — and to set rules like those for the inquiries targeting Presidents Richard Nixon and Bill Clinton, so that the minority party and the White House weren’t totally sidelined.

So far, though, Pelosi and her impeachment pointman, Rep. Adam Schiff, are moving the opposite way.

President Trump and other Republicans have been complaining about Schiff’s decision to hold most hearings behind closed doors, yet the Intelligence Committee chief opted for even greater secrecy in last Friday’s questioning of Marie Yovanovitch, the former US ambassador to Ukraine — conducting it as a deposition, which makes it a criminal offense for either side to discuss her answers.

That keeps even the rest of the House in the dark about everything except the opening statement Yovanovitch made public.

Schiff is going to even greater lengths when it comes to the whistleblower whose complaint launched this whole … adventure. He might not even have the guy testify — which would remove any chance for anyone to probe his motives and biases.

This, when Schiff has admitted that, contrary to his earlier account, his staff was in touch with the whistleblower before he’d even begun to file his complaint.

Why are Schiff and Pelosi stalling their own impeachment inquiry into their mortal political enemy, Donald Trump? Could it be that the information they have is not sufficient to justify the impeachment proceedings? Could it be that by some weird circumstance that one or both them accidentally read the Constitution and the rights given to the President?

Personally, Schiff is as trustworthy as the stereotyped ‘used car salesman or rip-ff mechanic’ and he’s just blowing steam and telling the same old lies he’s been telling every since Trump was elected.