Home » Uncategorized » Democrats Are Desperate To Win Elections… And It Shows 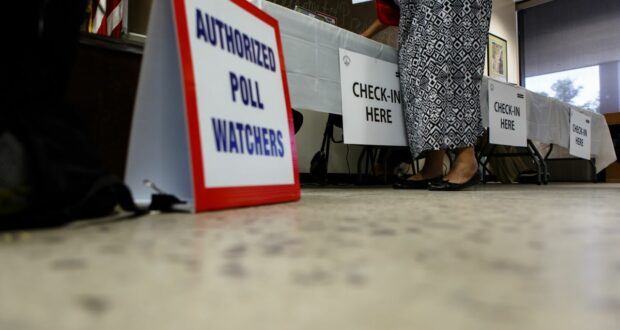 Democrats Are Desperate To Win Elections… And It Shows

Democrats are so determined to win control of America that they don’t care what they have to do or how legal, ethical or hypocritical it is.

Over the past few years, I’ve written a number of reports that detail a number of voter fraud instances all perpetrated by Democrats. It was found that some Democratic voter registration people were providing instructions to voters on how to cast more than one vote or vote in more than one state.

Dead people voted and in a number of instances, people showed up at the polls only to be told they had already voted when they hadn’t voted. Voter machines in numerous locations were reported to automatically change votes cast for Mitt Romney to votes for Barack Obama.

Some Democratic states, namely California and Oregon, passed laws that automatically registered voters just by applying for or renewing their driver’s licenses, regardless if the person was a citizen or not. It was reported that in the 2016 election at least 3 million non-citizens, (mostly illegal aliens), had voted with the majority voting for Hilary Clinton, who only won the popular vote by 1.8 million to 2.6 million votes, depending on what source you turn to.

They argued that it was unfair to minorities and poor people to require an ID to vote, yet these same people need an ID in order to receive their government assistance – welfare, food stamps and more. If they can obtain an ID to get their government handouts, then why aren’t they able to obtain an ID to vote? I’ve yet to find a Democrat who could reasonably answer that question.

Yet, with all of the documented voter fraud carried out by Democrats, they still failed to win control of the Senate and White House and that has current Democrats taking their voting efforts to whole new levels.

Some of the leading Democratic 2020 White House hopefuls have been wanting to allow convicted felons to vote, a right they lost upon their felony convictions. Please note that the Democrats don’t want to restore the right to own or possess a firearm to convicted felons, only the right to vote.

Some of the leading Democratic 2020 White House hopefuls, some of which are the same ones, also want to allow all non-citizens to vote in US elections. This means that the 15 million to 20 million illegal aliens would be allowed to vote for Democrats.

Consider this: Democrats were all upset and ready to impeach Donald Trump over allegations that he colluded with Russia to win the 2016 election when they are pushing to allow 15 million to 20 million foreigners to vote and sway our elections. Talk about hypocrisy!

In several Democratic-controlled cities, lawmakers are proposing to allow teens as young as 16 to vote in local elections. This is happening in Cincinnati, Ohio; Summerville, Massachusetts and Washington DC among others.

It’s interesting that a 16 year old cannot serve in the military, buy cigarettes or alcohol and yet they some how possess the intelligence to comprehend the importance of voting? At the same time some Democrats are wanting to allow 16-year-olds to vote, lawmakers are looking at raising the age to obtain a driver’s license to 18. They argue that the hormone driven teens are not responsible enough to drive a car, but they are to vote. The Ohio House just passed a measure to raise the age for obtaining a driver’s license. How much sense does this make other than to show just how desperate Democrats are getting.

All of this should speak volumes to the corruption of the Democratic Party and what lengths they are trying to win control of our government and lives.

Previous: ‘Game of Thrones’ prequels coming to HBO
Next: What You Need To Know Ahead Of This Year’s Flu Season