Home » Politics » Is it Time for Republicans to Embrace President Mike Pence? 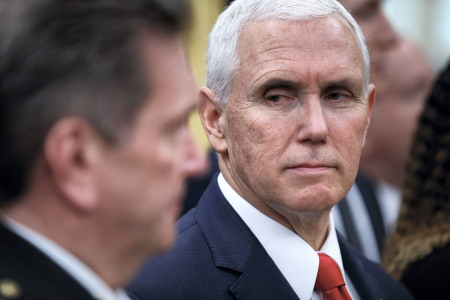 Is it Time for Republicans to Embrace President Mike Pence?

Scandals, true or not, have destroyed many a politician over the years while others remained immune to rightfully deserved scandals.

Hillary Clinton was plagued with scandals including her role in the Benghazi attack that resulted in the death of US Ambassador Christopher Stevens and 3 other brave Americans. Stevens had repeatedly warned of the danger and asked for more security and protection for months prior to the deadly attack and then Secretary of State Clinton refused to take his word nor did she do anything to ensure the safety of the Americans at the embassy compound. Clinton was also strongly implicated in a pay to play scandal while she was Secretary of State, where individuals and nations paid millions of dollars to the Clinton Foundation and then received favors or preferential treatments. Clinton also gave her approval to the traitorous sale of 20% of America’s uranium to a known enemy of the United States – Russia. Clinton’s campaign also was involved with the infamous Steele dossier that tried to ruin Trump’s presidential bid and involved a Russian national. Clinton’s campaign and the Democratic National Committee paid millions of dollars for the dossier. These are only a few of Clinton’s scandals. Even though she barely lost to Trump in 2016, it appeared that the scandals were not enough to hurt her.

Barack Obama’s tenure in the White House was rife with scandals and yet those scandals did nothing to diminish his political prowess. Obama was also involved in the Benghazi fiasco and the Uranium One Deal with Russia that did result in the criminal convictions of several Russians. Obama was also involved in the infamous Operation Fast and Furious. He also violated the US Constitution and federal law on numerous occasions and walked away from it unscathed.

Virginia Governor Ralph Northam was embroiled in scandal after it was discovered that he had dressed up in black face some years ago, and yet he successfully survived this scandal and remains as Virginia’s governor.

To some, it is apparent that regardless of any evidence or lack of real evidence against Trump, that he will be occupied with trying to defend himself from one scandal after another.  That occupation on scandals definitely takes away from Trump’s effectiveness as President and his ability to continue to lead the nation.

That prompts the question as to what should Republicans do at this point in time BEFORE the 2020 elections?

Therefore, should Republicans turn their attention and support to Vice President Mike Pence and push for him to be president? That question has been gaining some momentum in some conservative circles.

But is it the right decision? Could Pence rule without the same scandal ridden term as Trump? That’s what Michael Gordon, a contributor to Business Insider suggests:

I’m the last person to give advice to Republicans, but the GOP needs to move on to a President Mike Pence.

Trump’s drip-drip on impeachment, the daily scandal output, and an uncanny ability to say the wrong thing has led him to historically low approval numbers for a president on the eve of reelection. As a result, he’s setting himself up perfectly for failure — and he could bring many of his party loyalists with him.

By contrast, Pence will not be carrying Trump’s baggage on Election Day. To be sure, Pence brings his own problems to the party, including an ugly history of homophobia and sexism. Plus, he combines retrograde views with a total lack of charisma and an inability to sound sincere. But compared to Trump’s wild brand, Pence comes across as next to normal. He would stand stronger at the top of the ticket and help Republicans down ballot.

So, who should we support for the Republican presidential nomination for the 2020 election?