Home » Love & Life » The Morning Show Explores Abuses of Power, But Not Really 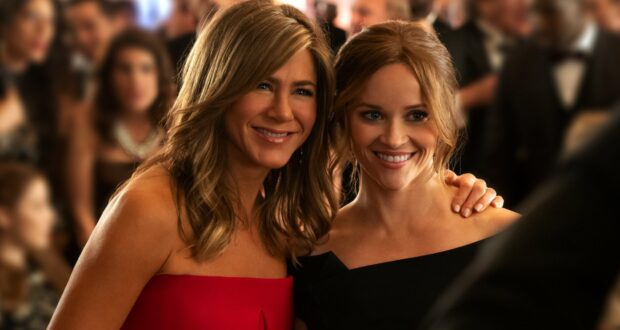 The Morning Show Explores Abuses of Power, But Not Really

In Ronan Farrow’s book Catch and Kill, which details how the former NBC News correspondent pieced together his Pulitzer-winning reporting about Harvey Weinstein, the first menacing figure we meet isn’t actually Weinstein. It’s Matt Lauer. Farrow’s reporting took place (about a year) before allegations of sexual assault would be leveled against the venerable Today Show anchor. At the beginning of Catch and Kill, Farrow details a meeting he had with Lauer, one of the few people at NBC supportive of the Weinstein story. Feeling reassured by the encouragement of the network’s biggest figure, Farrow leaves Lauer’s office, and notices a peculiar thing: a button under the desk that closes the door behind him.

The Morning Show, the mega-expensive prestige drama launching on Apple TV Plus, imagines the aftermath of a beloved anchor felled by the revelations of his sexual misconduct. The allegations are not as severe as Lauer’s — the show assures its audience all sex was consensual — but it’s hard not to see him in the character of Mitch Kessler (Steve Carell), repeatedly referred to as the “dad” of morning news and donning a name that even sounds like a bizarro-universe Matt Lauer.

It is not Kessler but his co-host Alex Levy (Jennifer Aniston) who has to deal with the fallout immediately. They’ve been on The Morning Show together for nearly two decades — the mom and dad of America for a program with the tagline “Start your day with your family”— and Alex scrambles to figure out how to address the news of her fired co-host, and who will replace him. To further matters, Alex is deeply concerned about her own contract with the show being renewed, which makes you wonder if the most important question here is whether she can keep her job.

The Morning Show is a confounding series full of actors you like, none of whom seem particularly thrilled to be there. In addition to Carell and Aniston, Reese Witherspoon plays Bradley Jackson, a small-time news anchor with the least convincing southern accent I’ve heard since Cindy in Final Fantasy XV. A clip of her screaming at a coal protest goes viral, and through a series of bewildering decisions by Alex and her boss, Bradley is suddenly in the running to replace Mitch.

Mitch, by the way, is far from cast off in the show. The Morning Show explores how one might wrestle with the repercussions of being Me Too’d. That turns out to be little more complicated than watching Carell bash a flat screen TV out of anger, and then later, unbelievably, tell an old colleague, “At first they came for the rapists, and I said nothing.” That’s probably the nadir of The Morning Show’s writing, the rest of it largely — if not clumsily — functional, but Carell does himself no favors by confusing awkward yelling with compelling acting. (In fact, his tantrums are not far off from his character in Anchorman.)

The only actor on The Morning Show who seems to be having any fun is Billy Crudup as Cory Ellison, a caricature of a network exec. Still, he moves through the show effortlessly with a smarmy charm (schmarm?), even though his motivations are more inscrutable than they are Machiavellian. At one point, Crudup shouts “chaos is the new cocaine,” and he almost gets away with it.

Most of the dialogue involves characters announcing how they feel. When they’re not, it sounds like they’re telling jokes without punchlines, like when Levy says, “People are idiots. Am I right?” At times, you can sense the show’s aspirations to be something of the Aaron Sorkin universe, except it possesses none of Sorkin’s strengths (the briskly paced chattiness; frequent levity) and most of his weaknesses (a privileged, navel-gazing sense of self-righteousness; the attempts at inclusion that end up feeling kind of racist). The show even looks deeply bland, which honestly might be the most refreshing non-decision in a world where every streaming show is basked in moody, saturated colors or attempts to evoke realism by shooting on handheld cameras.

Similarly, you could also describe the politics of The Morning Show as glossy and uncomplicated. Predictably, the fight for journalism is basically divided between good, salt-of-the-earth folks like Bradley and greedy, cynical execs like Cory. At one point, the argument is so stark that Cory says, in all seriousness, “What we really need on television right now — it’s not news, or fucking journalism. It’s entertainment.” (Again, somehow Crudup sells this without batting an eye. Give this handsome man an Emmy!)

Still, Jackson and Ellison’s dynamic is the show’s most intriguing one — a strength of on-screen chemistry — even if it is still situated in a very basic idea of an employee being real spunky with her boss. In fact, The Morning Show constantly addresses the notion of power and who has it, but never seems interested in how or why. Network execs are powerful because they’re at the top. Anchors like Levy have power, too, because they’re famous and in front of cameras (though the show finds the most improbable ways for her to wield it).

But for a series that wants to run at Me Too, it has little to no curiosity in how bad behavior is ignored, allegations are suppressed, or the people and institutions that keep it this way. Farrow’s book revealed the insidious and very deliberate ways men like Weinstein, Lauer, and Tom Brokaw could protect themselves through intimidation and NDAs. In The Morning Show, everyone is just too dang earnest, or really, too selfish to think about anyone but themselves.

Even the time we spend with Mitch, whose arc is unclear (though my hope is that it goes in the direction of “acceptance” rather than “redemption”), feels unearned. We get scenes like the one where he struggles to work the Keurig machine in his home. He gets frustrated, then furious, but eventually figures out how to operate the very simple coffee machine. And we’re supposed to feel… what exactly? It’s unclear. It seems fitting that The Morning Show is the key launch title for Apple’s major foray into original content. This is a company that values simplicity, clarity, and loves smooth corners so much that they designed their headquarters to be completely without rough edges.

There are hints of promise, though. At the end of the third episode, the last that was screened in advance to critics, a producer, Mia Jordan (Karen Pittman), wanders into the now-vacant office of Mitch Kessler. She admires his things, gazes in the mirror, and locates a button under the desk. The door of the office closes. The short scene suddenly gives The Morning Show a sense of menace and foreboding that had been missing for the previous three hours. Mia then goes to Levy’s office to confront her about how complicit she was in Mitch’s behavior. And suddenly The Morning Show has its first interesting moment, because it finally wants things to be messy.