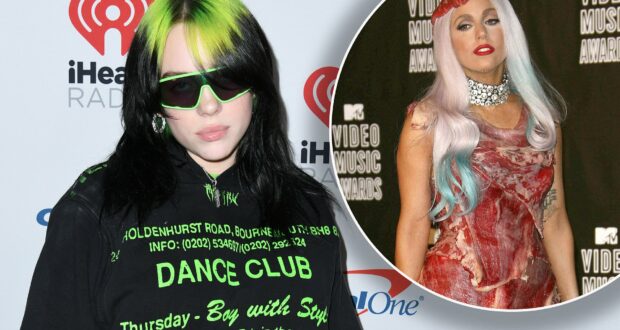 Billie Eilish has, unfortunately, become the Little Monsters’ bad guy. And the reason behind this war between Eilish and Lady Gaga‘s fans has a little something to do with that iconic meat dress. According to the Daily Mail, the whole matter began thanks to a recent interview Eilish, and her brother, Finneas O’Connell, did with Variety. In the interview, the siblings discussed pop culture moments from awards shows that defined the decade.

“I grew up watching the GRAMMYs, we all did. I used to judge all the girls’ dresses. That’s all I did, I barely paid attention to the music,” Eilish said.

The “bury a friend” singer’s comment sparked her brother to ask, “Was the meat dress a GRAMMYs event?”

“Eh, Yiiiiikes,” Eilish, who is vegan, responded. Given the singer’s vegan diet, it makes sense that she wouldn’t be fully on board with Gaga’s Franc Fernandez-designed meat dress, which the Oscar-winner actually wore to the MTV Video Music Awards in 2010. However, that hasn’t stopped Gaga’s fans, known as Little Monsters, from starting their own “#BillieEilishIsOverParty” on Twitter because of Eilish’s criticism.

I love You @billieeilish and love your music so much! But You cannot mess with the Queen @ladygaga #BillieEilishIsOverParty

“imagine saying “yikes” to a dress who is more popular than her and her brother combined…i mean,” another user wrote.

“can not believe she even ATTEMPTED to insult this complete serve……. LITTLE MONSTERS PUT YOUR PAWS UP RAWR XX,” yet another Gaga fan wrote on Twitter alongside a photo of the singer wearing the meat dress.

While Gaga’s fans engaged in the “#BillieEilishIsOverParty,” there were plenty of others who spoke out in defense of Eilish while using the same hashtag.

“So Billie, a vegan, said she didn’t like Lady Gaga’s meat dress and you guys are canceling her??? Stay pressed,” one Eilish supporter wrote.

Even though Eilish’s simple “yikes” comment turned into a big stan war on Twitter, she isn’t letting any of the backlash get her down.

When asked about the issue by Variety, she responded, “I didn’t even know about it. I don’t even care. Why would I care?” She continued, “People try to frame me for being shady and I’m not even, so I don’t care. I’m just being honest, I’m not gonna lie!”