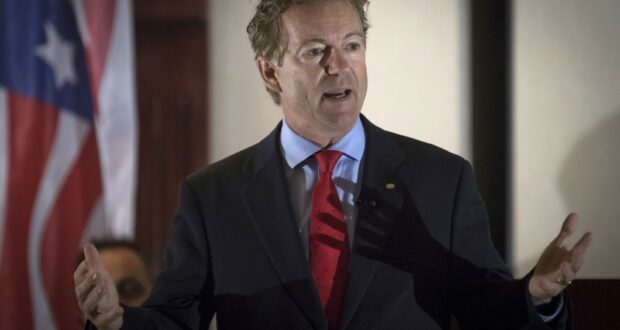 Sen. Rand Paul (R-KY) has proposed a bill that will destroy the retirement hopes of tens of thousands of future retirees. In a recent email from Paul, he stated, in part:

While you often hear me sounding the alarm over our country’s national deficit, that’s not the only debt in need of serious attention.  In the last decade, U.S. student loan debt has skyrocketed to its highest ever at $1.6 trillion, with the average 2018 college graduate owing approximately $29,200 in student loans.

Most people go to college so they can one day become more financially stable, but the accompanying pile of debt threatens that vision of a successful future.  That’s why I have a plan to help alleviate student loan debt, accelerate loan repayment, and enhance retirement savings.

This week, I am introducing the Higher Education Loan Payment and Enhanced Retirement (HELPER) Act.  Currently, everyone has to pay student loans with money out of their pockets that has already been taxed.  My bill would instead allow individuals to take, tax and penalty free, up to $5,250 from their 401(k) or IRA annually to pay for college or to pay back student loan debt, and it can be used to pay tuition and expenses for a spouse or dependent.  My bill also allows employer-sponsored student loan and tuition payment plans to be tax free up to $5,250, a common benefit new graduates are seeking from employers.

Because of student loan debt, workers are often not fully contributing to their 401(k)s.  My bill changes the incentive to invest, since that money can be used to pay down burdensome debt.

Being able to make student loan payments with pre-tax money will not only help people pay their loans off faster, but it will also lower their taxes overall.  U.S. bonds are currently paying less than 2%, while the federal government charges nearly 5% interest on an undergraduate student loan and up to 7% on a graduate loan.  Choosing to invest $5,250 in student loan repayment instead of U.S Bonds through a 401(k) is $163 more advantageous to workers, as 95 percent of the student loan payment goes to principal.

My bill also addresses the cap and phase out on deducting student loan interest — repealing it.  Student loans don’t just disappear when you advance in your career and earn more.  Moreover, capping and phasing out the interest deduction can have the effect of creating a tax penalty, disincentivizing workers from taking higher-paying jobs.

But this plan wouldn’t just help college graduates.  It would also help those planning for college.  Imagine you start working at Walmart at age 16 at their lowest pay, $10.18 an hour.  You work there through college (averaging 20 hours a week) — so about 6 or 7 years — and you contribute the full 6% toward Walmart’s 401(k) plan.  By the time you graduate, you will have more than $7,500 to pay toward your student loans.  That means you have already saved enough to pay off more than one fourth of your college debt by the time you graduate.

Furthermore, if two parents and their college-bound child each put aside the maximum amount of $5,250 per year, that would make a total of $15,750 pre-tax dollars per year available to pay for college.  This fact alone would transform how Americans save for college by essentially reducing college tuition by about a third by allowing parents to pay for it with pre-tax dollars.

Why will this destroy the retirement hopes of so many? To begin with, it’s difficult to get younger adults to save for retirement, let alone allowing them to take tens of thousands of dollars out of their 401(k) or IRA retirement accounts. Furthermore, many younger people who do opt to open a 401(k) or IRA, do not put in the maximum allowable and not all employers match that amount. Then, by allowing them to withdraw over $5,000 a year to pay for their student loans, which average about $29,200, would not only take that amount away from their retirement but it also takes away the compounded interest away from their retirement as well. Depending on how their 401(k) or IRA is set up and when they start putting into it, this could cost many people with student loans well over $100,000 or more from their vitally needed retirement. For those with higher student loans, it would mean even less left for their retirement.

Now add to this the economic predictions that by the time many millennials retire that Social Security as we know it today will no longer exist. This could mean that their 401(k) or IRA could be their sole source of retirement income. To allow them to take away from this will ultimately force many of these future retirees to continue to work through their retirement years and this is not what many want to look forward to.