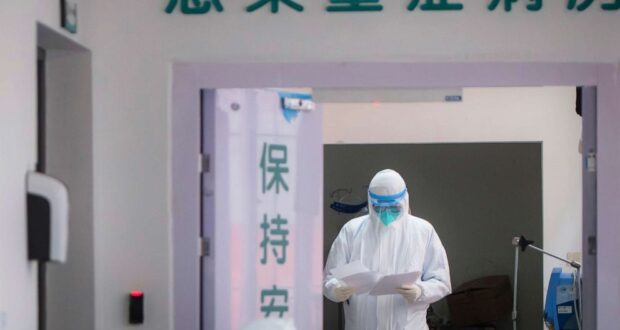 The death toll from the new coronavirus outbreak in China rose Monday as the government, scrambling to contain the epidemic, extended the Lunar New Year holiday to try to stop people from traveling.

The death toll stood at 106, according to health officials who have warned that the spread of the virus was accelerating.

Cases of the virus have been reported on four continents, including the United States, where a fifth case was confirmed Sunday. All the U.S. cases are patients who have recently traveled from Wuhan in Hubei province.

The Centers for Disease Control and Prevention has said it expected many more cases in the coming days, likely including person-to-person spread; but the CDC said that the immediate risk to the U.S. general public is low.

No deaths have been reported outside China.

The city of Wuhan, the epicenter of the outbreak, was still on lockdown with more than a dozen neighboring cities facing similar severe transport restrictions to help stop the spread of the virus.

Let our news meet your inbox. The news and stories that matters, delivered weekday mornings.

Health officials are asking anyone who had traveled to Wuhan or other affected areas recently to register and quarantine themselves for 14 days.

Meanwhile, Hong Kong, which has had eight confirmed cases, has barred residents of Hubei province and anyone who visited the area in the past 14 days from entering the city.

John McGory, a teacher at Jianghan University in Wuhan, told NBC News over the weekend that the city felt “like the twilight zone” as the lockdown continued.

“Today, I went out to get some bottled water and there’s absolutely nobody on the streets. And this is a city of 11 million people,” McGory, 65, said.

The limitations on movement for millions of people come amid one of the busiest times of the year for travel — the Chinese Lunar New Year. Chinese officials extended the week-long holiday until Feb. 2 to reduce mass gatherings and slow down the spread of the virus.

Local authorities in Wuhan have also announced they were suspending all passport and visa services for Chinese citizens until at least Jan. 30 to help control the spread of the virus.

Chinese health officials have warned that people who are carrying the virus but not showing any symptoms may still be contagious, which could complicate early detection and isolation efforts.

The U.S. Department of State said Monday that it ordered U.S. Consulate General Wuhan personnel to leave for the United States, and that a chartered plane for those people as well as other U.S. citizens was procured.

The plane is bound for Ontario, California, a State Department spokesperson said. It is scheduled to leave Wednesday local time.

As part of what is called the “repatriation effort” around 240 U.S. citizens are scheduled to arrive this week at the airport in Anchorage, Alaska, for refueling, the Alaska Department of Health and Social Services said.

The terminal in Anchorage is not open to the public. Everyone on board will be screened by Chinese and U.S. officials before leaving Wuhan, the Alaska health department said, and no one with symptoms will be allowed to leave on the plane.

Other countries, including France, Australia, Spain, Iraq and Japan, were also said to have been looking into moving their citizens out of the city.

The head of the World Health Organization was due to hold a special meeting with officials in Beijing on Monday to discuss how to contain the virus. WHO officials ruled last week that the outbreak did not yet constitute a global health emergency. Over the weekend, President Xi Jinping said the country was facing a “grave situation.”

State media reported that Chinese Premier Li Keqiang, who has been “entrusted” personally by Xi to visit Wuhan and inspect the ongoing efforts to contain the epidemic, arrived in the city Monday.

Previous: Why Senate Impeachment Trial is Illegal
Next: Dershowitz Schools “The View” Hosts on the Constitution