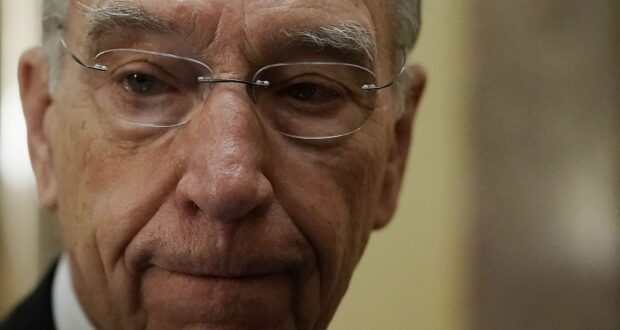 “That’s been a goal of mine and is still a goal,” Grassley said of legislation to reform section 232 of the 1962 Trade Expansion Act, which President Trump has used to impose major tariffs on close U.S. trade partners.

Section 232 gives the president authority to impose tariffs for national security purposes. Trump’s trade critics accused him of abusing the authority by imposing steep steel and aluminum tariffs on U.S. allies such as Canada, Mexico, the European Union and Japan.

Trump later scrapped the tariffs on Canada and Mexico after they agreed to an updated North American Free Trade Agreement. Trump has also threatened to use the authority to impose tariffs on automobile imports from the European Union and Japan.

Grassley has long discussed imposing Congressional oversight on 232 authority, and said he thought there was enough will to advance legislation this year.

“It may be just the committee working its will, but I think that there’s enough desire in my committee to do something about 232,” he said Wednesday.

“I think as far as my committee is concerned, 232 is the best we could do in legislation,” he added.

Grassley noted that he had yet to discuss the prospect with the committee’s top Democrat, Sen. Ron Wyden (Oregon).

Last month, Wyden said he was open to working out a response.

“I am all for putting some guardrails in this administration’s unpredictable and chaotic trade policy. We haven’t been able to find the solution yet, but I am ready to continue to work with the chairman to find a legislative solution that will garner wide bipartisan support,” he said.

Previous: Democrats Determined To Lead Us Into Another Great Depression
Next: Adele’s Recent Weight Loss Is Mainly Due To The Sirtfood Diet