Home » Politics » Democrats Determined To Lead Us Into Another Great Depression 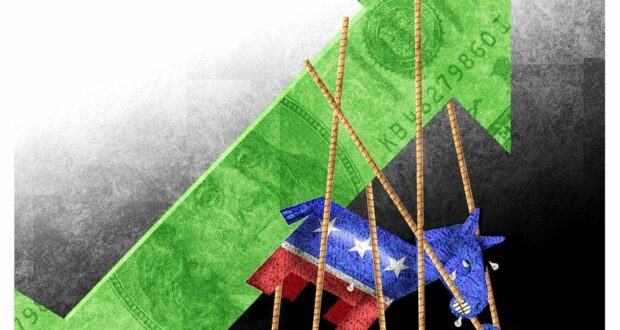 Democrats Determined To Lead Us Into Another Great Depression

On July 28, 1914, part of Europe was plunged into the start of what would become known as World War I. In the course of the 4 years, 3 months and 2 weeks of World War I, the brutal insanity had expanded over Europe, Africa, Middle East, China, Pacific Ocean, Indian Ocean, and Atlantic Ocean.

Additionally, about 7,700,000 civilians had also been killed. Millions of families grieved over the tragic losses and devastation of perhaps the world’s deadliest conflict at the time.

When the great war had ended, millions also celebrated that the carnage and destruction was over. Much of the industrial technology developed to support the war effort here in America was turned to peaceful pursuits and the betterment of life in general. By 1920, the streets of America had turned from the shadows of war to a time of enjoyment of life. It ushered in an era that is known today as the Roaring 20s.

The decade was one of economic prosperity that led to a more open and hedonistic society. Music and other forms of entertainment changed, reflecting the decadency of the time. Today, we think of the Roaring 20s as the time of the Charleston and women wearing flapper dresses. It was time of speak easies, dancehalls and an abundance of alcohol. It was also a time of organized crime and crime bosses.

It was also a decade controlled by Republicans, beginning with the election of Warren G. Harding in the 1920 election. It was a time when Republicans also controlled the Senate and House. Republicans tried their best to retain control of the nation, but by the later stages of the Roaring 20s, Democrats began to flex their muscle, enabling them to begin changing some of the economic programs that had led to America’s prosperity of the time.

Then it happened when the Stock Market suddenly took a dramatic fall in prices on September 4, 1929. Within a month, not only had the US Stock Market collapsed, but banks all over the nation also ended up shutting their doors due to a massive run by panicked customers. The economic chaos was not confined to just America, but it spread throughout most of the world as well. We know the period from that dreadful September day in 1929 to the later part of the 1930s as the Great Depression.

Millions of Americans lost their jobs, homes and more. Businesses closed and food became scarce. The nation was forced into a time of rationing and long lines for simple needs like bread, sugar, and milk. The percentage of homeless was far greater than that of today.

Nearly a century later, today’s Democrats are determined to repeat the devastating economic policies that led to the Great Depression. They have already told the American people that they intend to undo all of President Donald Trump’s economic policies that have led to today’s prosperity. If they regain control of Congress and the White House, they intend to reverse Trump’s tax cuts on businesses, the wealthy and the rest of us. They fail to realize that the record unemployment we have today is the direct result of Trump’s tax cuts and economic policies, all of which the Democrats intend to end and reverse.

If given the chance, Democrats will throw America into another Great Depression that they want and intend to use to usher in their socialist government in which we will all be slaves of the government. Part of their plan to bankrupt the nation and people is contained in their promises of free healthcare for all and free tuition for all, plans that come with a minimum combined price tag of $6 trillion a year. Compare that to the current US budget of less than $4 trillion a year. Adding the Democrat’s promises to the current budget will require an annual tax revenue of over $10 trillion a year and they expect you and me to pay for all of their promises of free things.

The only possible result is a Great Depression that will make the one a century ago seem like a mild recession. It will result in the unemployment of millions of Americans, the collapse of the home and building industry which will have a devastating domino effect that will topple every other form of industry in the nation. Millions of Americans will be homeless and destitute, more so than the nation experienced nearly a century ago.

There is an old adage that history tends to repeat itself and if given control of the government, this is one history that Democrats are determined to repeat.