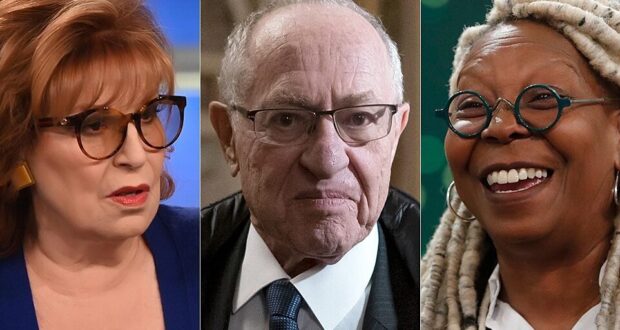 Dershowitz Schools “The View” Hosts on the Constitution

Liberal law professor Alan Dershowitz, fresh from the Senate floor on Tuesday, decided to appear on “The View” where he attempted to enlighten the likes of progressives Joy Behar, Sunny Hostin, and Whoopi Goldberg.

Dershowitz no doubt had surmised his appearance on the daytime gab show would be controversial because of his outspoken defense of the President and the Constitution.

Gruff disrespectful co-host Joy Behar immediately challenged Dershowitz’s scholarly pedigree claiming that no other constitutional scholar agreed with him about needing a crime for impeachment.

Dershowitz began to respond to Behar’s claim, referencing some historical facts, when he was rudely interrupted by Goldberg, “Ok, wait, wait, wait,” Goldberg said. “Alan, you know, in 1492 Columbus sailed the seas blue but listen, I need us to move on.”

However, the acclaimed professor would have none of it, telling a bemused Goldberg he wouldn’t continue without addressing the history of impeachment.

The senior co-host fired back; “You’re not going to get any time because you got four people trying to ask you questions.”

However Dershowitz would not relent, Goldberg had no choice but to allow the noted civil libertarian to continue.

Dershowitz began to slowly give a contemporary history lesson regarding today’s academics that choose their scholarly positions to impeach, based not on the Constitution, but rather who’s occupying the White House.

“Shortly after the Constitution was enacted, the dean of Columbia Law School said that the weight of authority was in favor of it being a crime,” he said.

Amid cross-talk over needing a crime for impeachment, Goldberg told Dershowitz, “I’m moving you on or I’m cutting you off — one or the other is going to happen.”

The tone of the discourse between professor Dershowitz and the three co-hosts took a more reasoned approach when conservative Meghan McCain, the 4th co-host on The View, asked Dershowitz how the left could strengthen their case and convince the American people and potential skeptics that President Trump did, in fact, do something wrong.

“It’s not my job to tell the Democrats how to make a better case. I think they needed evidence of high crimes and misdemeanors,” he replied. “Look, I’m in this process because I love my country and I love the Constitution and I don’t want to see the Constitution weaponized into a political tactic that can be used against any president.”

Dershowitz then noted that President Trump “a Republican” will eventually leave the White House, and someone else will someday occupy the Oval Office who may very well be a Democrat, and a Republican-controlled House could move forward with their own version of a sham impeachment process.

“They will impeach him on abuse of power. On the floor of the Senate, I listed 40 American presidents who have been accused of abusing their power. From Washington to Jefferson to Lincoln to current presidents,” he explained. “You can’t use the concept of abuse of power. It’s too broad. It’s not in the Constitution. And I’m here to defend the Constitution, not any particular president. I’m here to defend future presidents as well as the current president.”