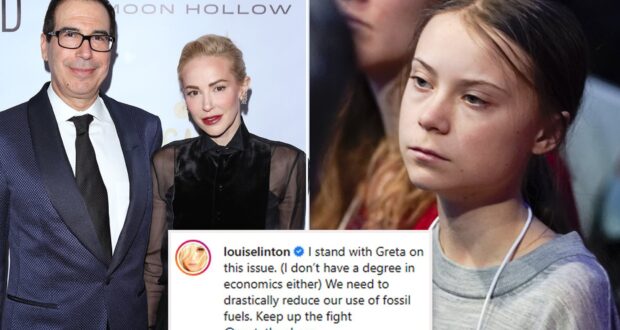 Treasury Secretary Steve Mnuchin’s actress wife Louise Linton shared – and then quickly deleted – an Instagram post backing Greta Thunberg instead of her husband after he told the 17-year-old activist to go to college before lecturing people on climate change.

Mnuchin took a swipe at Thunberg during a press briefing at the World Economic Forum in Davos, Switzerland, on Wednesday over her recommendation that both the public and private sectors should divest from fossil fuels.

When asked how that would affect the US economic model, Mnuchin said of Thunberg: ‘Is she the chief economist? Who is she? I’m confused.’

Then following a brief pause, he said it was ‘a joke,’ adding: ‘After she goes and studies economics in college, she can come back and explain that to us.’

In the caption of a photo collage with Thunberg and Mnuchin, the 39-year-old Scottish actress wrote: ‘I stand with Greta on this issue. (I don’t have a degree in economics either) We need to drastically reduce our use of fossil fuels. Keep up the fight @GretaThunberg.’

The post was taken down without explanation after about 30 minutes.

The post included a screenshot of a direct message thread with a critic who responded to one of her photos.

The critic wrote: ‘Very cool that you post about loving animals and are heartbroken about wildfire devastation, but you’re married to a pencil d***ed man who is bullying a teenage activist trying to publicly discuss climate change. You must be married to a wonderful man! Bet you love his money very much.’

Linton sarcastically responded: ‘Thanks for this. Lovely to wake up to and start my day with.

‘I am not my husband. Thanks. I happen to love Greta. Whatever he says has nothing to do with my views or opinions and what you just did was bully me, unjustly.

‘Thanks for the kick in the teeth. Have a lovely day.’

New York Magazine correspondent Olivia Nuzzi shared a screenshot of the post before it was deleted.

Thunberg personally hit back at Mnuchin in a series of tweets on Wednesday – writing that it ‘doesn’t take a college degree to realise that our remaining 1.5° carbon budget and ongoing fossil fuel subsidies and investments don’t add up’.

Without naming Mnuchin specifically, she added that ‘either you tell us how to achieve this mitigation or explain to future generations and those already affected by the climate emergency why we should abandon our climate commitments’.

Thunberg continued to brush off his comments at a press briefing on Friday, saying they had ‘no effect’ on her or her fellow campaigners.

She acknowledged such young activists ‘are being criticized all the time.’

‘We cannot care about those kinds of things,’ she said, insisting that her priority was drawing attention and action to concerns about global warming.

‘The situation is not being treated like the crisis it is.’

Over the past year, Thunberg has taken issue with many aspects of US policy, including President Donald Trump’s decision to pull the country out of the Paris accord to limit global warming.

Mnuchin insisted that US policy has been misinterpreted and that Trump ‘absolutely believes’ in a clean environment.

The US, Mnuchin said, has been a leader in reducing carbon emissions. ‘What the president objects to is the Paris agreement, because he thought it was an unfair agreement for the United States.’

Mnuchin said the US position had been ‘misunderstood’.

‘There is a real misinterpretation of the US policy. Let me be very clear: President Trump absolutely believes in clean air and clean water and having a clean environment.’

Mnuchin and Linton are pictured together in October 2017

The Trump administration and Greta Thunberg have sparred indirectly since Tuesday on panels in Davos but organizers have carefully averted any direct confrontation.

In a speech on Tuesday, Trump castigated the ‘prophets of doom’ and those that predicted a climate ‘apocalypse’, while Thunberg sat in the audience.

Shortly before leaving the Swiss ski resort, Trump said he would have ‘loved’ to have met the activist, Time magazine’s Person of the Year.

Thunberg repeated her climate warnings, hammering home in her speech that it was time to ‘panic’ because ‘the house is burning’, as she did the previous year in Davos.

Mnuchin attended Yale, where his father also went. He graduated with a bachelor’s degree which he confirmed for the first time Thursday was in economics. He then went to work for Goldman Sachs, where his father had also worked.

He went on to found the film production company Dune Entertainment, which in addition to helping out in the relaunch of the Mad Max franchise in 2015, has The Lego Movie and Wonder Woman among its credits.

Mnuchin and Linton met through mutual friends in 2013 and tied the knot four years later in 2017.