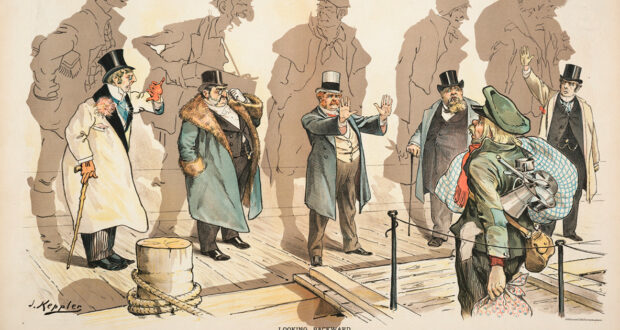 Over the course of the last year, I’ve seen a number of different things that have been promoting our ancestors and using them to help promote the open border policy of Democrats.

On the weekend of Christmas, I saw another advertisement on television about our immigrant ancestors. I’ve also heard a number of Democrats and members of the sewage stream media comment about the fact that we all had ancestors who were immigrants and then try to use that history to justify their desire to welcome any and all immigrants, legal and illegal.

However, this is far from a justifiable comparison and an argument that lacks integrity and logic.

Allow me to explain:

On my dad’s side, I’ve traced my family back to the late 1600s as they came to America from England and Scotland. On my mom’s side, her ancestors came here from Germany. Yes, I’ve had immigrant ancestors. However, note that they all came here via legal means at the time.

If Democrats want to make a real comparison of my ancestors with today’s illegal aliens, then allow me to offer a real comparison. When cars were invented, anyone could buy a car and drive it and they didn’t need a driver’s license until years later. When my ancestors came here, there were not the immigration laws we have today, much like driving before licenses were required.

My wife’s father immigrated here from Barbados in 1927. He came here legally and was processed through the Ellis Island immigration process. Not only did he enter the US via legal means, but he also worked hard to become a United States citizen.

I have close friends that immigrated here from South Africa and others from Australia. All of them came here legally. It took the family from South Africa nearly 7 years for all of them to be legally allowed into the United States. They fled the racial issues that are destroying South Africa and endangered their lives, but they still waited for the legal process, even though they feared for their safety and lives every day they had to remain in South Africa.

The accurate comparison here is not only having to have a driver’s license to buy and drive a car today but also having to have proof of insurance in order to get the car licensed and able to take out on the road.

Like so many other topics where Democrats intentionally mislead and lie, their arguments about immigration using our ancestors is completely baseless, bogus and nothing but a bunch of balderdash. Their argument is no different than the old-time snake oil salesmen. That’s the best comparison that can be made.

Previous: Brad Pitt’s Joke Wins Big At The Golden Globes
Next: Democrats Determined To Lead Us Into Another Great Depression