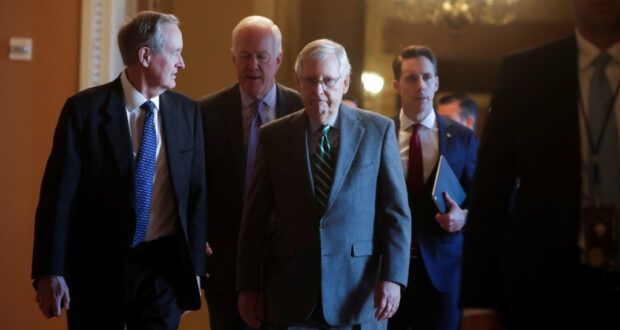 Why Senate Impeachment Trial is Illegal

Democrats have been furiously trying for three years to impeach and remove Donald Trump from office. In December, House Democrats finally took the bold step to pass 2 articles of impeachment against Trump. After several weeks of stalling, House Squeaker Nancy Pelosi finally gave the articles of impeachment to Senate Majority Leader Mitch McConnell.

This is historic and completely illegal and every Senate Democrat in attendance of the impeachment trial should be charged and convicted of perjury, among other crimes.

As has been broadcast all over the sewage stream media, this is only the 3rd time that a sitting US president has been impeached by the House.

The first time was in 1968 when the House voted to approve 11 articles of impeachment against then-President Andrew Johnson. The charges ranged from misdemeanors to high crimes. His impeachment began on February 24, 1868, and ended on May 26, 1868, when the Senate acquitted Johnson of all charges.

The second impeachment of a US president took place from December 1998 to February 1999 with the impeachment of Bill Clinton. The House voted on 4 articles of impeachment but only approved 2 of them, charging Clinton with perjury and obstruction of justice. The Senate acquitted Clinton of both charges, allowing the adulterous and lying Democrat to remain in the White House.

Today’s historic third impeachment of a sitting US President officially began on December 18, 2019, but officially began on Wednesday, November 9, 2016, when it was officially announced that Trump had won the Electoral College vote. Before the sun sat that same day, many Washington Democrats announced they would do anything possible to impeach Trump and remove him from office.

Once Democrats gained control of the House in January 2019, they quickly set about to impeach Trump. They finally succeeded when they voted to approve 2 articles of impeachment – abuse of power and obstruction of Congress.

At this stage, Democrats were still acting legally, although extremely hypocritical. They intentionally forget that Barack Obama abused his power on numerous occasions and obstructed Congress as well as committed perjury before the people of the United States and more. He also violated the US Constitution and assumed the power and authority of Congress and defied federal court orders.

So, what makes the current impeachment trial of Trump illegal?

Simple! When Supreme Court Chief Justice John Roberts swore in the Senators, every Democrat present committed perjury. Part of the oath they swore to was to judge impartially, which we all know to be a huge lie. There is nothing impartial about Senate Democrats. They had their minds made up that Trump is guilty three years ago, long before the issue over Trump, the Ukraine and Biden was ever heard of or brought to light.

In any courtroom in America, anyone found to lie under oath is charged and frequently found guilty of perjury. The same standards legally apply to the Senate impeachment trial of Trump.

Additionally, the Constitution also guarantees that all jurors are impartial and since Democrats had their minds made up long before the Senate trial, that means they are all in violation of the US Constitution and therefore the entire Senate impeachment trial of President Donald Trump is illegal and should be stopped immediately.

The problem is, no one Washington DC has the guts to uphold the Constitution and the laws.