Home » Politics » 2020 Primary: Biden thinks he’s running for US Senate, while Bernie doubles down on Fidel 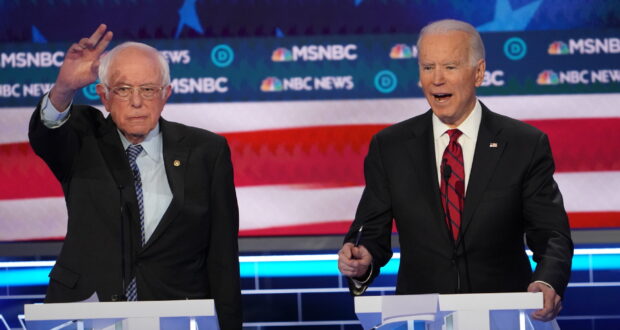 2020 Primary: Biden thinks he’s running for US Senate, while Bernie doubles down on Fidel

The traveling clown car, better known as the Democratic Presidential Primary is headed to South Carolina on Saturday — with one of their top tier candidates believing he’s running for the Senate, rather than the presidency.

With only a few days to go before the February 29th primary within the all-important “Palmetto State,” Biden’s ill-timed gaffe must have Democratic voters scratching their collective heads wondering if the former Vice President is up to the task of actually running the nation.

Biden’s critical blunder attended by several other 2020 Democratic hopefuls came at the conclusion of his remarks to the South Carolina Democrat Party’s “First in the South” Dinner when he apparently became confused regarding which office he was actually running for.

The astounding gaffe, once again reminds primary voters that the 77-year old former Senator from Delaware may indeed have some undisclosed memory issues, which needs to be addressed immediately.

Ironically Biden, the frontrunner in South Carolina, received the longest ovation of any of his rivals attending the dinner, began his speech in a strong concise manner, before things began to unravel.

“You’re the ones who sent Barack Obama the presidency. And I have a simple proposition here: I’m here to ask you for your help,” Biden pleaded to Democratic voters. “Where I come from, you don’t go very far unless you ask. My name’s Joe Biden. I’m a Democratic candidate for the United State’s Senate. Look me over. If you like what you see, help out? If not, vote for the other Biden. Give me a look though, okay?”

The crowd no doubt perplexed, hesitated a moment, attempting to process what they just heard before being magnanimous and applauded, the confused Biden.

The former Vice President after his dismal performances in Iowa and New Hampshire had proclaimed South Carolina his “firewall,” hoping to clinch his first primary victory there; however, a surging Sanders fresh from an impressive win in Nevada, has closed the gap heading into Saturday.

Moreover, speaking of Sanders, boneheaded remarks praising Cuban Dictator Fidel Castro, which drew the ire of thousands upon thousands of displaced Cuban refugees, along with Cuban/Americans all over the United States, and especially within Miami, Florida, affectionately known as “Little Havana.”

Nevertheless, Socialist Sanders doubled down on his fawning of Fidel and actually criticized those offended by his praise of a mass-murderer during a televised town hall on Monday night.

“When Fidel Castro first came into power … you know what he did? He initiated a major literacy program. It was a lot of folks in Cuba at that point who were illiterate and he formed the Literacy Brigade … and they went out and they helped people learn to read and write  You know what? I think teaching people to read and write is a good thing,” Sanders said in response to criticism.

He continued, “I have been extremely consistent and critical of all authoritarian regimes all over the world including Cuba, including Nicaragua, including Saudi Arabia, including China, including Russia. I happen to believe in democracy, not authoritarianism. … China is an authoritarian country … but can anyone deny, I mean the facts are clear, that they have taken more people out of extreme poverty than any country in history. Why you criticize when I say that — that’s the truth. So that is the fact. End of discussion.”

What is utterly remarkable within Sanders’ statement, is his the lack of prepositional historical context regarding authoritarian regimes, he cites China accomplishments of taking their people out of “extreme poverty” while dismissing Mao’s “Great Leap Forward” revolution that systematically tortured, killed and starved over 45 million of his own countermen within a 4-year period.

Frank Dikötter, a Hong Kong-based historian, says Mao’s Revolution “ranks alongside the gulags and the Holocaust as one of the three greatest events of the 20th century… It was like the Cambodian communist dictator Pol Pot’s genocide multiplied 20 times over.”

Previous: Are Bloomberg and Hillary Scheming for Her to Become the Democratic Nominee?
Next: Bizarre Heat Source Coming From Below Antarctica