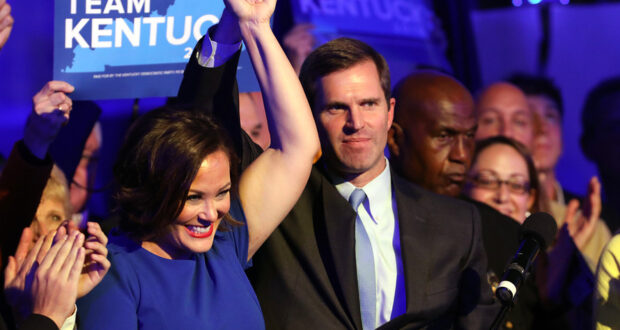 In Kentucky, the governor’s race was an ugly and bitter one, filled with lies perpetrated by Democrats.

Incumbent Republican Gov. Matt Bevin was portrayed as a man who hated teachers and public workers because he tried to fix a broken state pension fund. The pension fund was billions of dollars in debt and in danger of collapsing and being unable to pay the pension of state workers, which includes teachers.

Because Bevin tried to be financially responsible and offer a viable pension alternative, Democrats labeled him as a hater or teachers. Their campaign was so successful that many conservative Republican teachers told me that they planned to vote against Bevin because he hates teachers. I tried my best to explain to them that Bevin doesn’t hate teachers and if fact tried his best to come up with a viable alternative to salvage some kind of pension fund for them. They did not believe me.

When the votes were counted, Democrat Steve Beshear garnered 49.20% of the votes and Bevin received 48.83%, giving Democrat Beshear a narrow margin of only 0.37%.

Basically, Democrat Beshear won on a campaign based on lies and now Kentuckians statewide are having to pay for Democrats’ lies.

It was revealed on the local news that Gov. Beshear is forcing cities to pay up to 12% more (compounded annually) to the state to help pay for the financially troubled pension system. Many cities are asking the state to freeze the plan because they cannot afford to pay out an additional 12% in revenue to the state. If forced to do so and comply, cities will have no alternative but to try to raise local taxes and cut services and workers, meaning more people will be laid off while everyone else will be forced to pay more.

Former Gov. Bevin attempted to do the right thing without causing an increase in taxes or costing people their jobs, but Democrats turned it all into a campaign of hate and they won on that campaign.

Now, look at our national election between Democrats and Republicans, especially those running for the White House. Democrats continue to portray President Donald Trump as a hater because he has been trying and succeeding in doing the right thing. Their campaigns are based on the same kind of lies that Democrats used to win the governor’s office in Kentucky and if they win, every American citizen will pay the price, just like Kentucky residents in the cities are being forced to pay.

If Democrats win the national election, it will cost many people their jobs and homes, just like what is probably going to happen to the people of Kentucky.

If Democrats win in 2020, you can be sure that our taxes will go considerably higher than they are now and millions of Americans will lose jobs and homes. It will result in another recession, possibly a more severe recession than the one we recently recovered from. Some economists predict a Democratic victory could lead to a second Great Depression.

What happened and is happening in Kentucky should be a warning to every American voter. Don’t fall into the web of lies being spun by Democrats or you’ll end up like the fly that flew into a spider’s web.

Previous: Will Seniors be Able to Survive a 2020 Democratic Victory?
Next: Is Coronavirus Outbreak Due to Chinese Bio-Warfare Program?