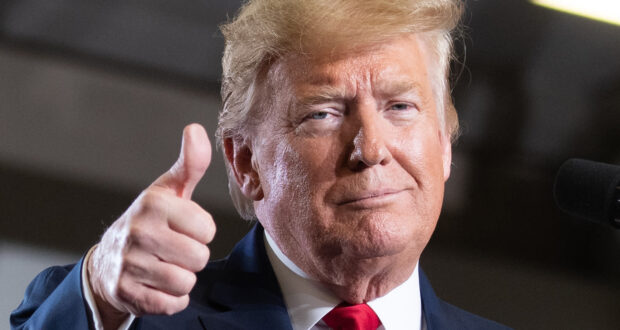 New Gallup Poll Has President Surging to Highest Approval Yet

The debacle of the impeachment hoax, combined with the disaster of the Iowa caucuses has convinced many Americans that President Trump is the real deal in preserving America’s values for the future.

In a stunning new Gallup Poll, the President is enjoying his best approval numbers since he was nominated back in 2016.

Ironically impeachment of the President by desperate Democrats to purposely influence the 2020 election, may have in fact contributed to moving the needle, however not in the direction disgruntled Democrats had hoped for.

In that, the President’s approval numbers actually soared over 10% from when delusional Democrats began their impeachment folly to where it is, at this moment.

Trump now enjoys a 49% approval rating attributed to increases in both Republican and that all-important Independent support, which is key.

Even more impressive is his support among GOP voters which stands currently at 94%, and 42% among registered Independent voters, which are up from 6 and 5 percentage points from early January, respectively.

The polling was conducted in the middle of the Senate impeachment trial, with just over 52% favoring acquittal, indicating that Americans were indeed paying attention to the unfolding drama in the House, however, 46% of those surveyed favored conviction, indicating once again the partisan political divide gripping the nation.

However, a 6% gap favoring the President, from a near 50/50 split suggests that those individuals paying attention to the proceedings realized the unfair treatment by House Democrats towards the President and his team, denying him the ability to call witnesses.

In addition to overall approval and favorability for acquittal, President Trump’s approval on other issues has also increased.

For example, just over 63% of those polled now approve of how the president is handling the economy that number is up by 6% from November of 2019. Moreover the highest approval rating since George W. Bush, who saw his job approval rise after the terrorist attack on 9/11.

Trump also enjoys his best numbers handling foreign affairs, with just under 47% and foreign trade at 50%, due to the success of signing into law the new United States-Mexico-Canada trade deal, replacing the old North American Free Trade Agreement, which the President has termed the worst deal ever devised.

The President also does extremely well with voters when it comes to our national defense and protecting America’s interests against the terrorist regime of Iran, with more Americans supporting the Presidents military action against the rogue nation, with 45% disapproving, compared to 53% approving of the U.S. military action that took out the despot Iranian general who used roadside bombs to kill and mutilate hundreds of American soldiers and civilians alike.

On the flip side of the Gallup Poll, registered voters are evenly divided at 50% as to whether the President deserves to be re-elected.

When the question of the President’s reelection was asked just before the 2018 midterm election, 41% of registered voters felt that the Commander-in-Chief deserved a second term.

Democrats still believe by 44% that Joe Biden has the best chance of beating Trump, followed by Bernie Sanders at 19% and Michael Bloomberg at 10%. Meanwhile, Democrats are most likely to name Sanders (28%) as the candidate who is closest to them on the issues, followed by Biden (20%) and Elizabeth Warren (16%).

Previous: Is Coronavirus Outbreak Due to Chinese Bio-Warfare Program?
Next: Jay-Z Explains Sitting During National Anthem at Super Bowl LIV