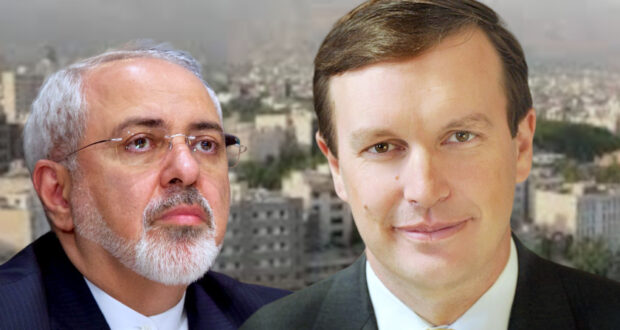 According to columnist and senior editor at the Federalist Magazine, Mollie Hemingway, several Democratic  Senators had a secret meeting with Iranian Foreign Minister Mohammad Javad Zarif during the Munich Security Conference, without the apparent knowledge of the State Department.

Moreover the fact that the meeting was not disclosed until the Federalist reported on the clandestine meeting prompted Secretary of State Mike Pompeo to speak out during a joint press conference with Ethiopian Foreign Minister Gedu Andargachew on Tuesday.

“Sen. Chris Murphy of Connecticut and other Democratic senators had a secret meeting with Iranian Foreign Minister Mohammad Javad Zarif during the Munich Security Conference last week, according to a source briefed by the French delegation to the conference. Murphy’s office did not respond to repeated requests for comment by press time,” the outlet reported.

The Treasury Department last summer had sanctioned Foreign Minister Zarif, calling him “a designated sponsor of terrorism around the world.”

“Javad Zarif implements the reckless agenda of Iran’s Supreme Leader and is the regime’s primary spokesperson around the world.  The United States is sending a clear message to the Iranian regime that its recent behavior is completely unacceptable,” Treasury Secretary Steven Mnuchin said at the time. “At the same time the Iranian regime denies Iranian citizens’ access to social media, Foreign Minister Javad Zarif spreads the regime’s propaganda and disinformation around the world through these mediums.”

Murphy’s clandestine meeting with the rogue régime is reminiscent of Former Secretary of State John Kerry’s attempt to obstruct the President’s new foreign policy decree against the terrorist state, by also meeting secretly with Iranian officials in hopes of salvaging the scrapped nuclear deal.

The secret meeting by Murphy and three other Democratic senators is simply a continuation in undermining the President’s efforts to rein in the terrorist régime.

Moreover, the sheer hypocrisy exhibited by the Connecticut lawmaker is simply stunning. In February 2017, Murphy demanded investigations of then-National Security Advisor Mike Flynn because he had a phone call with his counterpart-to-be in Russia.

At the time a condescending Murphy announced: “Any effort to undermine our nation’s foreign policy – even during a transition period – may be illegal and must be taken seriously.”

Fast forward to his secretive meeting with Iranian Foreign Minister Mohammad Javad Zarif just last week, and his “effort to undermine our nation’s foreign policy,” however in Murphy’s world, it’s perfectly fine to secretively meet with rogue régimes provided they’re done by Democrats like himself and former Secretary of State John Kerry.

Christian Whiton, former State Department senior advisor in the Trump and George W. Bush administrations said, “Unless it was authorized by the president or secretary of state, conducting independent foreign policy sends mixed signals to our adversaries,”

Adding, “It seems very unpalatable. If we want to talk to Iranians, they know how to reach us and they don’t need to go through an intermediary.”

Previous: What should we do if a ‘planet-killer’ asteroid takes aim at Earth?
Next: Scientists Say That Sodom and Gomorrah Were Actually Destroyed by “Fire From the Sky!”