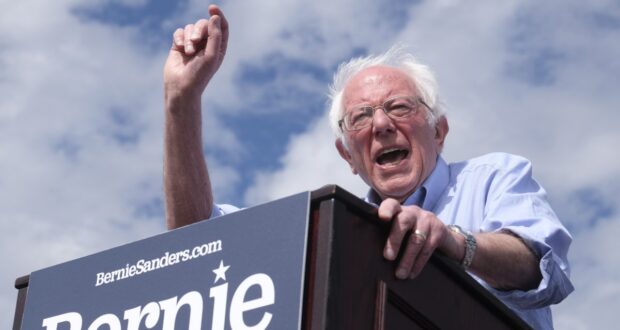 The news has been filled with reports that Russia is working to help Bernie Sanders win the 2020 presidential election. The sewagestream media try to appear shocked by the allegations, even though they shouldn’t be, for example The Washington Post reported:

U.S. officials have told Sen. Bernie Sanders that Russia is attempting to help his presidential campaign as part of an effort to interfere with the Democratic contest, according to people familiar with the matter.

President Trump and lawmakers on Capitol Hill also have been informed about the Russian assistance to the Vermont senator, those people said, speaking on the condition of anonymity to discuss sensitive intelligence.

It is not clear what form that Russian assistance has taken. U.S. prosecutors found a Russian effort in 2016 to use social media to boost Sanders’s campaign against Hillary Clinton, part of a broader effort to hurt Clinton, sow dissension in the American electorate and ultimately help elect Donald Trump.

Note how they quickly tried to turn their attention away from Sanders to President Donald Trump, but also note the difference this news is being handled.

There is overwhelming evidence that the Obama administration knew about Russian entities trying to influence the 2016 election in favor of Donald Trump. They knew about it by early summer and yet they did absolutely nothing to stop or prevent it, nor did they make it publicly known. They were so confident that Hillary Clinton would handily defeat Trump that they sat on their socialist duffs and did nothing. It was only AFTER Trump won that Democrats became outraged about the Russian election interference. Had Clinton won, we probably wouldn’t know about it today.

Sanders is trying to downplay the news of Russian support, but deep down, you can bet he is pleased with the news. After all, it’s only natural that Russia would support Sanders in the election because he is an openly professing socialist, unlike the rest of the Democrats running who are socialist in liberal clothing.

What still baffles me is why any Russian would have tried to help Trump defeat Clinton when it was Clinton and her fellow Democrats who have been helping Russia. Remember the infamous Uranium One deal where the Obama administration sold 20% of America’s uranium supply to Russia, a known enemy of the United States? Then Secretary of State Hillary Clinton helped approve the sale, an act that by the US Constitution is an act of treason for aiding an enemy.

If you listen to Sanders, many of his proposed policies mimic the governmental control one sees in Russia and other communist and socialist countries.

It’s also logical that Russian entities would NOT support Joe Biden due to his interests in the Ukraine, a country literally at war with Russia.

It’s also logical that Russian entities would NOT support Pete Buttigieg due to him being gay, something the Russian government has tried to ban.

It’s also logical that Russian entities would NOT support Elizabeth Warren, even with her socialist nature because she is a lose cannon and cannot be trusted.

None of the Democrats still in the running seem to be any real threat.

There was a report that some Russian entities are also working to help Trump win re-election which really makes NO sense at all, since Trump has imposed strong sanctions against Russia and has severed many of the ties with Russia created by socialist Obama.

Yep, it only makes perfect sense that Russians would support Sanders and the sewagestream media need to stop their fake acting of being so shocked at the news.