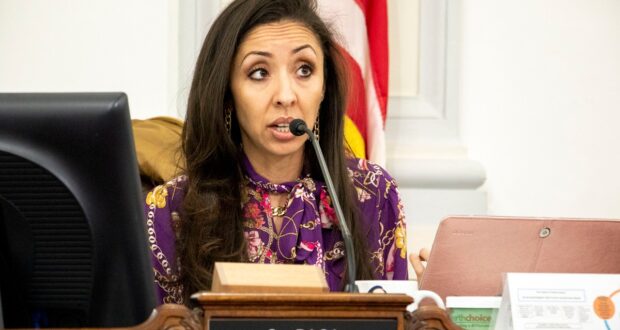 A Denver City Councilwoman apparently stands in “solidarity” with infecting Trump supporters with the deadly coronavirus at the President’s upcoming campaign rallies.

It all started when Democratic Councilwoman Candi CdeBaca received an email from a constituent, in which she announced: “For the record, if I do get the coronavirus I’m attending every MAGA rally I can.”

CdeBaca rather than condemning the offensive tweet, actually condoned it, responding with “#solidarity Yaaaas!!” with laughing emojis, perhaps even passing the vile tweet along to others.

The egregious tweet along with CdeBaca’s callous response drew an immediate backlash from social media, with even the President’s son responding.

“The depths to which Democrats are sinking to politicize coronavirus is disgusting,” Republican National Committee Rapid Response Director Steve Guest said in a statement to Fox News on Tuesday. “Democrat leaders, both nationally and in Colorado, need to condemn this deranged comment.”

Still others on social media posted; “She appears to have made the statement on her government Twitter account.

While another posted; “You are in need of medical help. Please seek a doctor who can help you extinguish the hate in your heart. Vile.

The 33-year old first-term councilwoman from Denver’s 9th district claims she posted her response in jest. However Republicans saw nothing humorous in a disease that has thus far killed at least 3,061 individuals (and counting), with almost 90,000 infected across 66 countries.

CdeBaca is also a supporter of self-described Democratic Socialist Bernie Sanders, and in fact, has modeled her political campaign along the same lines as the 78-year old Vermont Senator.

At a recent debate, the progressive Democrat/Socialist lamented “what is false is this belief that capitalism is the only economic structure that fosters innovation and growth.”

Faced with mounting criticism her office was forced to respond on Tuesday: “Councilwoman CdeBaca made a sarcastic tweet on Twitter to call attention to the Trump administration’s downplaying of the coronavirus as a ‘hoax,’ no more dangerous than the common flu. Rather than conservative outlets making a four-day-old tweet their focus on Super Tuesday, they should focus their energy on demanding a competent federal response to this public health crisis instead.”

Adding, “The Councilwoman will continue to focus on her priorities in her district and not on the mostly out-of-state conservative media who have targeted her since even before her election to office,” the office said.

The response by CdeBaca’s staff attempting to downplay her vile tweet and somehow flipping her remark back towards the President caught the eye of Colorado Republican Party Executive Director Lx Fangonil who acknowledged that CdeBaca’s tweet is “simply disgusting.”

Adding, “There can be no room in our politics for wishing harm on Americans who have different political beliefs,” he said. “Democrats in Colorado and across the country need to condemn this evil statement.”

Moreover, the Colorado Republican Party has actually called for a recall over Councilwoman CdeBaca’s remarks.

The original tweet had been deleted, however multiple media outlets, including Denver Republicans, the Colorado GOP, and several others had been able to capture CdeBaca’s tweet using a simple screen capturing tool called “screengrab.”

“1. Are you listening to ANYTHING Trump has said about the virus?” CdeBaca tweeted Tuesday.

“2. Do you realize Trump reduced the virus to the common flu? 3. I know sarcasm is hard to read in a tweet, but you are usually a bit quicker than this. Next time I will use more emoji’s just 4 you.”

Previous: Americans Are More “Pro-Life” Than They Think They Are!
Next: Is China’s Plan to Destroy World Economy With Coronavirus Backfiring On Them?