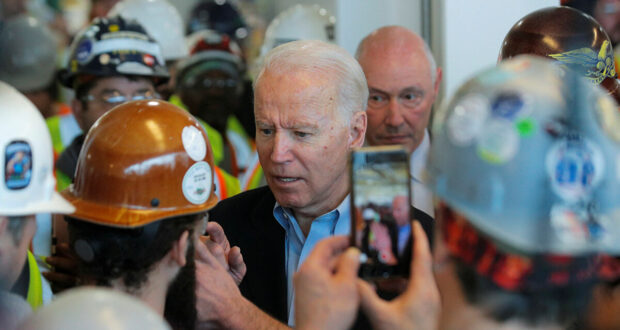 Enraged Biden Threatens To Slap Voter In The Face

Joe Biden suddenly flew into a rage while visiting a Detroit auto plant Tuesday morning, when a plant worker confronted the former VP on gun control.

The campaign stop began with the 78-year old Democratic frontrunner smiling and shaking hands with plant workers, as he waved and walked through the crowd taking pictures and signing autographs when Biden suddenly stopped to engage a worker who wanted to discuss Biden’s position on gun control.

The abrupt confrontation instantly became a tense encounter when the plant worker asked the now seething VP why he wanted to take away his Second Amendment rights.

That question immediately enraged Biden almost provoking a physical confrontation as he shoved his finger only inches away from the startled plant worker’s face, then growling at the worker calling him a “horse’s ass, before threatening to slap him in the face.

The former Delaware Senator continued his rant at the shocked worker shouting over the noise of the large auto plant, that he would “take the AR-14s away,” as both his entourage along with his Secret Service detail attempted to usher him away. While a campaign worker attempted to diffuse the situation repeatedly shouting “Thank you!” However, Biden continued his verbal assault, to the dismay of onlookers.

The hostile encounter was captured on video and instantly went viral on social media, with many posting their take on the encounter.

.@joebiden touring auto plant in Detroit quickly gets into an argument with a worker over guns.

A number of individuals were quick to point out that Biden apparently has no knowledge of what he’s talking about when it comes to the subject of guns.

Today Joe Biden argued with a voter, called the AR-15 an “AR-14” and then threatened to slap the voter in the face. This is an old man losing control of his mind. At what point do Democrats realize what a giant mistake they’ve made backing senile Joe?

The confrontation most likely happened because Biden has promised if elected he would tag former 2020 hopeful Beto O’Rourke as his point man in confiscating firearms from law-abiding citizens.

After O’Rourke jumped on the Biden bandwagon and endorsed the gaffe-prone politician, Biden let it be known that Beto would be his man stating; “I want to make something clear, I’m going to guarantee you this is not the last you’ve seen of him,” referring to Beto.

The 47-year old former congressmen from El Paso, Texas, raised quite a few eyebrows before he dropped out of the presidential primary when he was asked if he would forcibly confiscate firearms.

However, this isn’t the first time that an unhinged Biden has been captured on video either threatening or insulting a voter at one of his campaigns.

Just before the Christmas holiday, Biden once again went on a rampage towards another potential voter in Iowa, calling the individual “you’re a damn liar, man!”

The dust-up occurred when a male voter asked if Biden’s political influence helped his son Hunter land a lucrative job with a Ukrainian gas company, at which point an enraged Biden shouted at the man.

“You’re a damn liar, and that’s not true,” during a campaign event in New Hampton, Iowa, as an audience of adults and children looked on.

Biden then took a cheap shot at the man’s appearance calling him “fat” than challenging the individual to push-ups.

“You want to check my shape on, let’s do push-ups together, let’s run, let’s do whatever you want to do, let’s take an IQ test.”

The former VP is apparently having some serious anger-control issues, which may indicate a significant underlined medical issue.