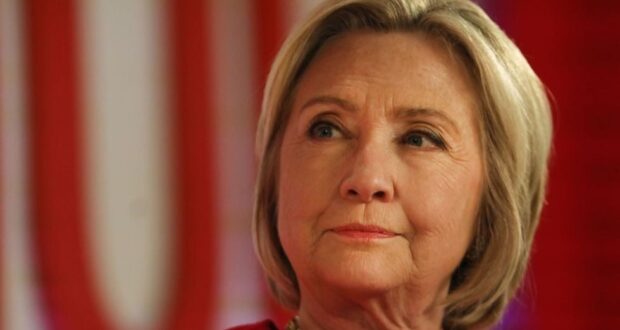 If Biden Fades, Look for a Hillary Trump Rematch

It all makes perfect sense now…

Recently, Bill Clinton decided to emasculate himself in a new documentary – consequently just before the 2020 election – with his absurd excuse that his “anxieties” caused him to take advantage of a starry-eyed intern.

In the upcoming Hulu documentary titled “Hillary,” the former president recounts his two-year affair with the then 22-year old Lewinsky — claiming his sexual obsession was “to manage my anxiety.”

The four-part documentary attempts to humanize these two sordid and unsavory characters, portraying themselves as two ordinary small-town individuals caught up in the cut-throat world of politics, where survival of the fittest comes at a price.

However award winning conservative columnist Michael Goodwin has another theory why Hillary refuses to simply go away, like other presidential candidates who’ve been beaten, and why Hillary keeps sounding off of on Sanders, with her eye towards unseating a confused Biden.

In that most political pundits now believe that frontrunner Joe may, in fact, be the Democratic nominee, unless he begins to forget he’s in a race for the presidency, which seems more likely every day, moreover what will happen if Trump destroys him, in their debates?

The New York Post columnist explains in his article titled “Democrats’ hunt for Trump slayer may lead to Hillary Clinton comeback,” predicts that Hillary is waiting in the wings to be drafted at the Democratic National Convention when Biden’s gaffes along with his mental instability becomes all too evident to the political establishment, and thus becomes toxic to mainstream voters.

The Fox News contributor recaps for his loyal readers the sudden rise of the Biden campaign after a dismal start in which all of the political pundits had written the former VP’s political obituary, only to be surprised by his sudden surge in South Carolina, and equally stunned by Sanders disappointing finish on Super Tuesday, along with the unexpected departure of both 2020 contenders Buttigieg and Klobuchar, throwing their support for Biden.

Goodwin writes: “So it’s all set. Biden will be the nominee and give the party a solid chance of scoring a November trifecta: beating President Trump, taking the Senate and holding the House.”

“Count me as skeptical. Instead of a smooth ride, it’s more likely that the Dems’ desperate search for a Trump slayer will hit more turbulence and an alternative to Biden still could be necessary.”

And that where the Clinton’s “makeover” comes in with their new tell-all “mea culpa” documentary, in which a remorseful President Clinton awakens a sleeping Hillary concerning the affair, at first denying it.

“I was just waking up … I was having a hard time processing and I said, ‘What are you talking about? What is this? What do you mean?’” Hillary, 72, recalled.

“He said, ‘There’s nothing to it. It’s not true. I may have been too nice to her, I may have paid her too much attention … but there was nothing.’”

“He was adamant, and he was convincing to me,” Hillary recalls.

The former first lady said she was convinced the accusation was made up, hearkening to her infamous allegations of a “vast right-wing conspiracy” out to get her and her husband.

The documentary was just released on Friday, to cleverly coincide with the Democratic primary, giving the Clintons valuable airtime. The promotion skillfully uses Hillary in a series of brief advertising spots, complete with a storyline for each part of the 4-part documentary, including massive slick promotions on the internet.

According to reviews, the duo inserts large doses of glamour and cultural seriousness, regarding the issue of feminism, despite Bill’s propensity for sexually abusing woman, throughout his career, and Hillary’s obvious lack of empathy concerning the woman he raped and assaulted.

What’s left if Biden should crash and burn, may be a repeat of 2016, with Hillary replaying her “damsel-in-distress” performance, and once again getting beaten.