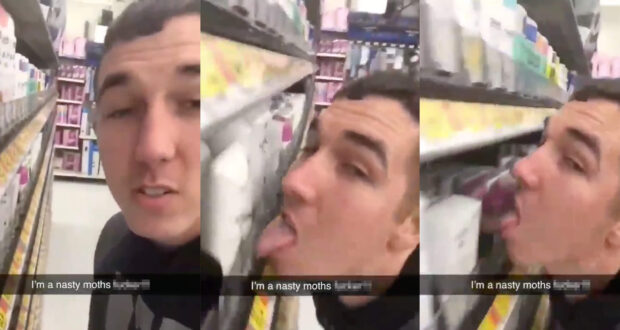 A self-inflated, self-styled bad*ss got himself in a heap of trouble and may well be branded a terrorist after recording himself licking items at a Walmart in Missouri. The man wanted to show how little he cared about legal countermeasures enacted to slow the threat of contracting the Wuhan coronavirus – by spreading his possibly-infected spittle over store products that others would handle.

Cody Pfister, 26, lives in Warrenton lies about an hour’s drive west of St. Louis along I-70. He decided to fight back against the new strain of infectious coronavirus that originated in Wuhan, China, in late December 2019, by making a double-dog-dare-you video where he taunted:

“Who’s scared of the coronavirus?”

To drive home his skepticism that the public needs to self-isolate and take precautions to prevent the spread of COVID-19 virus, the wayward youth bragged profanely to prove how unconcerned he is in the face of a growing public health emergency:

The video went viral on social media sites. Warrenton police stated that people as far away as the Netherlands, Ireland, and the United Kingdom had voiced their concerns about the message given. The official police response was:

“We take these complaints very seriously and would like to thank all of those who reported the video so the issue could be addressed.”

Court records indicate that Pfister shot the footage on March 11 at the Warrenton Walmart. The miscreant was taken into custody this week. Warrenton prosecutors charged him on March 24 with making a terrorist threat, a low-level felony.

Pfister was booked into the Warren County jail without bond. The unsanitary protester has previous convictions for burglary, theft of a firearm, drug possession, and driving while intoxicated (DWI).

In another bizarre, yet related, incident, a grocery store manager in Wisconsin called police after an unidentified woman licked a freezer door handle while he was disinfecting them. Her actions were meant to display her blatant disregard for federal and local mandatory business closures and self-isolation measures to slow the spread of COVID-19.

The event unfolded at a Festival Foods store in Marshfield, Wisconsin on the afternoon of March 14, a Saturday. According to the police report:

“While sanitizing handles in the freezer section store manager Marty reported looking over at a woman who proceeded to look at him and lick the door handle of a freezer door.”

“Contact was made with a 53-year-old Marshfield woman who stated she licked the door handle in protest of the Caronavirus [sic]. The female states she has not used this method of protest at any other locations and was told her behavior was uncalled for.”

After the woman “became confrontational with the store manager and law enforcement,” a no-trespassing order was filed. The store manager indicated he had not planned to take legal action before that.

Disinfecting door handles and other frequently handled surfaces is recommended to kill the germ that causes the respiratory disease.

Because grocery stores have been deemed essential businesses and therefore exempted from enforced temporary closures, staff members are taking stricter measures where cleanliness is concerned.

A celebrity-seeking social media user made a recent attempt to kick off a “coronavirus challenge,” popular among youthful viewers. She uploaded a video she took of herself licking an airplane toilet seat to disobey the guidelines crafted to minimize disease transmission.

The hashtag #CoronavirusChallenge did trend for a while but hardly anyone followed suit. Most of the post-challenge conversations focused on either making jokes or sharing strategies to avoid spreading the infection.

People who understand how contagion spreads through groups of people by close contact are objecting more and more to public displays of defiant ignorance. Social distancing – keeping 6 feet away from others – and avoiding high-traffic places can and will help slow this new coronavirus.

Disgruntled college students at packed Florida beaches recorded themselves whining about how inconvenient the antiviral measures were. The uploads went viral but, rather than garner support, provoked widespread outrage online.

“Individuals need to take responsibility and every level of government has got to be very clear: Don’t be on the beach unless you can somehow be completely by yourself. I mean, we’ve got to figure out the social distancing.”

At the other end of the public safety spectrum, State Senator and former Florida governor Rick Scott advised everyone to “get off the beach,” if not for their own sakes but to help others:

“Don’t take a chance that you’re going to…cause your grandparent or your parents or another friend from school to get sick.”

“Every part of government has to start telling people: ‘Take some personal responsibility here. Don’t infect other people. Don’t take a chance that you’re going to be the one who is gonna cause your grandparent, or your parents, or another friend from school to get sick.”

“What are you thinking? Stop doing it.”

Previous: Harvey Weinstein Tests Positive for Coronavirus
Next: Could a Recession Kill More Than the Coronavirus?