Home » Uncategorized » The Unsolved Mystery of the ‘Toxic Woman’ 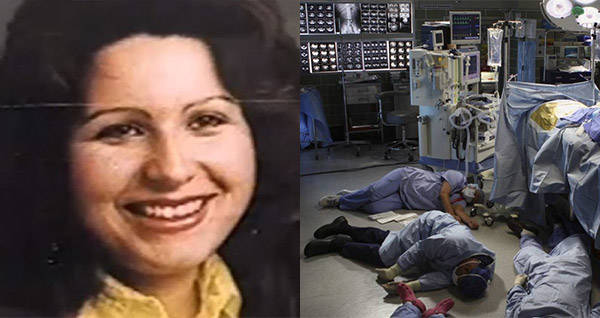 The Unsolved Mystery of the ‘Toxic Woman’

Right now, everybody is legitimately afraid of encountering someone with the coronavirus. But long before that outbreak was making international headlines, there was a bizarre case of a “toxic woman” he sickened anyone who got near her.

On the evening of February 19, 1994, a 31-year-old woman named Gloria Ramirez, who had been battling cancer, suddenly saw her health take a turn for the worse.

Gloria’s blood pressure plummeted and she developed severe difficulty breathing and dizziness. As her family tried to comfort her she began vomiting profusely, and the decision was made to rush her to Riverside General Hospital’s emergency room at 8:14 p.m. Little did anyone know the series of strange events were about to unfold – becoming one of the most baffling medical mysteries of all time.

By the time she arrived, Gloria was described as completely incoherent, her heart was beating significantly faster than normal, and it was soon realized that she was in the midst of cardiac arrest. Medical staff immediately gave her drug treatment and put her on oxygen, but this seemed to do little to help her inexplicable condition, and nurses began removing her upper clothing in order to administer defibrillation. As Gloria was being prepped it was noticed that there was a strange, slick oily sheen on her skin, and the air became pervaded by an odd, fruity odor with an undertone of garlic, which was thought to be coming from her mouth. Others present would tell of also noticing a faint whiff of ammonia as well, but no one had any explanation for any of this.

The doctors decided to take a blood sample, and when a nurse inserted the syringe things got stranger still. The ammonia odor got much stronger, and they noticed what was described later as “white crystals” floating around in the sample.

As the main doctor in charge looked at the blood sample in bafflement, the ammonia stench grew even stronger and seemed to envelop the room, and it was then that attending nurse Susan Kane suddenly crumpled to the floor, complaining of a burning sensation in her face. As she was taken away, medical student Julie Gorchynski passed out, followed by respiratory specialist Maureen Welch, and before long people were dropping left and right like flies, eventually almost all in attendance also falling unconscious or experiencing sharp physical symptoms including lightheadedness, a burning sensation, nausea, dizziness, spasms, weakness of the limbs, and partial paralysis.

The emergency room was then ordered to totally evacuate all non-essential personnel, after which it was soon ascertained that a total of 23 people had fallen ill in Gloria’s presence, five of them severe enough to require hospitalization themselves, and no one had the slightest idea as to why.

Despite all attempts to help her, Gloria Ramirez would pass away just 35 minutes later, the official cause listed as kidney failure related to her cancer. As to why everyone who got near her seemed to faint or fall violently ill, no one knew, and the answers were never definitively found.

Technicians in full HAZMAT gear removed Gloria’s body and brought it to the morgue. Her autopsy was conducted under similar conditions.

What Turned Gloria Into a Toxic Terror?

Initially, the autopsy found nothing toxic in Gloria’s body, which only deepened the mystery. In the meantime, medical staff who had been affected and those who had been present during the initial incident were thoroughly interviewed, and all of them were convinced that there had been a toxic reaction, although all of their blood tests turned out completely normal.

The samples that had been taken from the ER similarly showed no trace of any contaminants in the vicinity, coming out completely clean. Considering that there was absolutely no physical evidence whatsoever of any contamination in either Gloria Ramirez, the room itself, or any who had gotten ill in her vicinity, Drs. Ana Maria Osorio and Kirsten Waller, of California’s Department of Health and Human Services, came to the conclusion that it was all the result of some sort of mass hysteria, a theory that was not readily accepted by those who had been there.

A second autopsy at the prestigious Lawrence Livermore National Laboratory revealed a possible explanation. During this second autopsy, it was found that her blood contained abnormal levels of dimethyl sulfone, which although naturally produced by the human body was found to be in concentrations three times higher than usual, which was a staggering amount.

It was, therefore, speculated that Gloria had been using a compound called dimethyl sulfoxide as a self-administered pain medication, which can be easily purchased at a hardware store and is usually used as a degreaser. It is also sometimes used as a misguided home remedy for pain, spread over the skin where it can leave an oily residue, and furthermore emanates a smell like garlic. According to the Lawrence Livermore National Laboratory, Gloria had likely used dimethyl sulfoxide to help deal with her pain from her cancer, after which it had, through some sort of little-understood chemical reaction, helped along by the electric shocks from the defibrillator, transformed into the highly toxic and carcinogenic dimethyl sulfate, which would have been released when her blood was taken.

As to the ammonia smell, it was surmised that the amounts of Tylenol, lidocaine, codeine, and an anti-nausea medication called Tigan found in Gloria’s blood could have formed a concoction that could have created amines in the body, which smell like ammonia.

It all seemed like a perfectly rational explanation, but upon closer examination, the theory did not hold up.

Gloria’s doctors accepted the findings of Livermore labs, but they said that while present, none of those chemical were in her blood in substantial enough amounts to cause the kinds of reactions that felled so many in the ER. And even if they had been, dimethyl sulfate, while a toxic carcinogen, is not known to produce the specific symptoms exhibited in those present, and with such frightening, decisive speed.

Throwing more shade on this theory, was that there was no dimethyl sulfoxide found among the dead woman’s belongings at home, as well as the fact that her family denied that she had ever used it.

To compound the mystery when Gloria’s family wanted to have an independent third autopsy done, they found that for some reason her body had been “stored improperly,” and had decomposed to state rendering another conclusive autopsy impossible and that her heart and original blood samples had gone missing!

The missing blood and organs, and the state of the body would convince the Ramirez family that something sinister was going on and that there was a cover-up being enacted by the hospital, yet what they could be hiding is anyone’s guess.

Over the years ideas have been floated ranging from secret biological weapons to an accidental administration of chemicals used for making methamphetamines that got mixed up with the hospital’s intravenous bags.

Whatever the answers may be, Gloria Ramirez was buried along with a lot of unanswered questions, and it remains a bizarre medical mystery to this day.

What do you think? What was it about this woman that caused all near her to be sickened? Please reply using the comments below.

Previous: “WOW” Democratic Lawmakers Praise Trump’s Handling of the Pandemic
Next: Trump Gets Polling Boost – Will It Last?