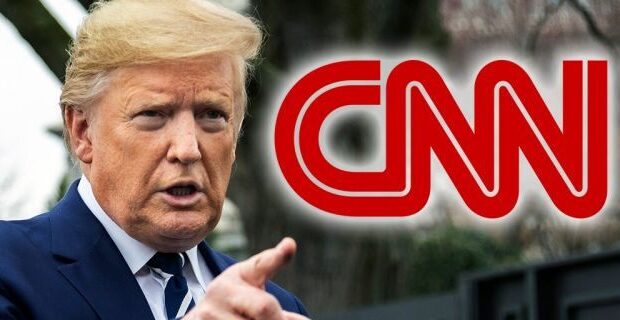 U.S. President Donald Trump and his re-election campaign have made good on their threat made last fall to sue CNN as a legitimate news source. The GOPs have charged several media outlets of biased and unfair reporting since the launch of Trump’s 2016 election campaign.

Charles Harder signed a letter dated October 16, 2019, that contained the incumbents’ complaints. The year before, Harder hinted that Trump would take the New York Times to court after publishing a “highly defamatory” investigative report on the Commander-in-Chief’s personal business affairs.

Harvard Law School professor Rebecca Tushnet, who teaches false advertising law, said the legal arguments raised in Harder’s October letter had “no merit” and, in her opinion, no lawsuit would be filed.

On Friday, March 6, an attorney representing Trump revealed that the lawsuit just filed against CNN seeks “millions of dollars” in damages. The charges include libel against Trump and spreading fake news to Americans.

The complaint alleges that an article published by CNN.com on June 13, 2019, falsely stated as a fact that the Trump campaign had “assessed the potential risks and benefits of again seeking Russia’s help in 2020 and has decided to leave that option on the table.”

At issue is a piece still posted online, contributed by Larry Noble, titled: “Soliciting dirt on your opponents from a foreign government is a crime. Mueller should have charged Trump campaign officials with it.”

According to the lawsuit against CNN, Noble’s “Defamatory Article” makes multiple false claims, including that the Trump Campaign “assessed the potential risks and benefits of again seeking Russia’s help in 2020 and has decided to leave that option on the table” without citing any facts or logic to support this opinionated claim. The complaint stated that the Defamatory Article is false, constituting fake news.

The suit was filed in the U.S. District Court for the Northern District of Georgia where CNN is headquartered.

“The complaint alleges CNN was aware of the falsity at the time it published them but did so for the intentional purpose of hurting the campaign while misleading its own readers in the process…the campaign filed this lawsuit against CNN and the preceding suits against The New York Times and The Washington Post to hold the publishers accountable for their reckless false reporting and also to establish the truth.”

The suit maintains that CNN knowingly published false information “because there was an extensive record of statements from the Campaign and the administration expressly disavowing any intention to seek Russian assistance.”

Furthermore, “CNN’s actions show willful misconduct, malice, fraud, wantonness, oppression and that entire want of care which raises a presumption of conscious indifference to the consequences, and accordingly the Campaign is entitled to an award of punitive damages against CNN.”

The complaint added that Trump’s legal team issued a request to CNN to retract and apologize last month – a request the broadcast network’s executives declined.

“The Campaign, therefore, was left with no alternative but to file this lawsuit to: publicly establish the truth, properly inform CNN’s readers and audience (and the rest of the world) of the true facts, and seek appropriate remedies for the harm caused by CNN’s false reporting and failure to retract and apologize for it.”

Trump has called out CNN repeatedly and calls the network’s content “fake news.” Other prominent liberal mainstream media outlets have been guilty of unfair and biased coverage, according to the conservatives.

The NYT went on the legal defense on Wednesday, February 26, 2020, after the lawyers representing the President’s 2020 campaign filed a libel lawsuit that alleged the major newspaper “knowingly published false and defamatory statements” in an op/ed piece that ran in March 2019.

Max Frankel, a former NYT executive editor, penned an article titled “The Real Trump-Russia Quid Pro Quo” that appeared in the opinion section, which is managed under leadership independent of the company’s news department.

Frankel maintained “there was no need for detailed electoral collusion between the Trump campaign and Vladimir Putin’s oligarchy” since the two parties “had an overarching deal: the quid of help in the campaign against Hillary Clinton for the quo of a new pro-Russian foreign policy, starting with relief from the Obama administration’s burdensome economic sanctions.”

Opinion or not, the Trump campaign’s lawsuit charges that the NYT was at fault because the media giant was “well aware when it published these statements that they were not true.”

The op/ed article was published by the NYT “knowing it would misinform and mislead its own readers” due to the organization’s “extreme bias and animosity” regarding the Trump administration.

The courts will now decide whether published opinions that state untruths as facts are protected by free speech or libelous.

Previous: Is China’s Plan to Destroy World Economy With Coronavirus Backfiring On Them?
Next: What Are Some Alternatives to Traditional Therapy?