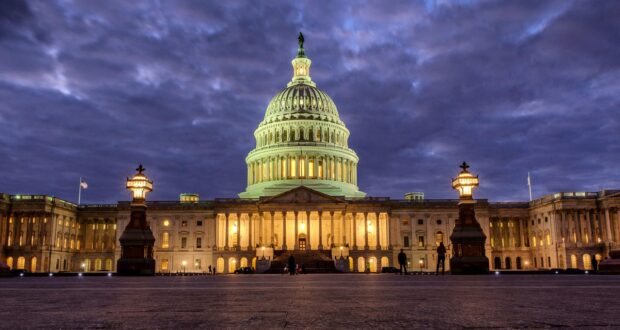 The President doubled down this week warning lawmakers on both sides of the aisle that he would veto the newly passed House bill dubbed the “Foreign Intelligence Surveillance Act Bill” if congress failed to investigate the “attempted coup” – which has undermined his administration for nearly 3-years.

Trump tweeted out that, “many Republican Senators want me to Veto the FISA Bill until we find out what led to, and happened with, the illegal attempted ‘coup’ of the duly elected President of the United States, and others!”

His apparent warning came after the bipartisan House bill was passed with broad support to reauthorize the investigative tools used by the FBI in obtaining warrant applications due to expire on March 15th.

The bill supposedly reforms the secretive FISA court along with the abuses committed by the FBI outlined by the IG report last year.

The bipartisan bill brought together an unusual cast of characters from vocal Trump supports like Reps. Devin Nunes and Jim Jordan, to impeachment crazed critics like Reps. Jerrold Nadler and Adam Schiff, all concerned regarding surveillance abuses by the FISA court.

The bill also has the support of Attorney General Bill Barr and FBI Director Christopher Wray, who said it will protect against future “abuse and misuse.”

Congressmen Jordan from Ohio also chimed in stating “The legislation begins to address the problems that we saw with the FBI’s illegal surveillance of Trump campaign associate Carter Page.”

Who happened to also weigh-in on the merits of the new bill, calling it a “sham.”

Page, a former Trump campaign worker blasted the new bill along with the “failure” of Republican lawmakers to do their due diligence, before attaching their names to the bogus bill, saying it represents a “lazy authorization” of the surveillance tool that improperly targeted him during the FBI’s Russia investigation.

The 48-year old former foreign-policy adviser to the President on Wednesday sent a message to Fox News reminding the network of their coverage of the 2012 attack in Benghazi which claimed the lives of 4-Americans, including his friend, US Ambassador Christopher Stevens.

“Just like the Republicans in Congress failed to achieve justice following the death of my friend Chris Stevens, this sham bill represents the latest lazy authorization of completely unchecked bureaucratic power.”

Page continued, “After the Deep State put so many lives at risk, none of the corrupt perpetrators have been held accountable. Meanwhile, Congress has still not authorized reparations from the countless Trump supporters, who remain as powerless crime victims amidst all of the DOJ’s and the FBI’s lies.”

He added: “This remains a historic failure of epic proportions.”

Even Fox’s senior judicial analyst Judge Andrew Napolitano, who seldom agrees with the President, implored him to veto the bill.

Appearing early Thursday morning on Fox & Friends, Napolitano argued that the bill just passed by the House was nothing but “cosmetic” reforms, with little substance

“I want the President to veto this because the President knows he has been victimized by this culture which allows suspicionless warrants on no basis whatsoever,” Napolitano said.

Adding “Mr. President, if you are watching, tell them this is not good enough and it violates the Constitution and that you have been victimized by it,” he continued, speaking directly to President Trump.

“The only changes in this new bill are cosmetic, some secret reporting requirements to the attorney general,” Napolitano said, adding that “the same thing will happen again.”

The likelihood that the President will veto the bill is almost a certainty if he doesn’t get a promise that a real investigation concerning those within the deep-state, who attempted to overthrow him, isn’t being properly investigated.

Previous: Which Celebrities, Athletes and Public Figures have been Diagnosed with Coronavirus?
Next: Harvey Weinstein Sentenced 23 Years – Here’s What He Has To Say